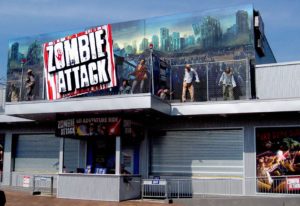 In Niagara Falls, Canada, Clifton Hill is known as the most popular family-fun street and tourist draw besides the Falls themselves. Already operating a Triotech XD Theater 16 seats with a wild west movie, the team at HOCO was looking for an attraction with a universal appeal that would fit to a wide demographic group. They decided to install a 36-seat multi-sensory interactive theatreXD Dark Ride. However, instead of offering a selection of several Triotech movies, they elected to focus on one single title: Zombies! This allowed HOCO to fully theme the attraction to that content.

“We’ve had a great opening to the summer,” recalled HOCO president Harry Oakes. “It is a really good revenue. It has been well received, we got a lot of social media comments, great feedback from the customers. It has been a good experience!“

Triotech’s partnership with Clifton Hill started in 2012 with an XD Motion Theater of 16 seats. Strong revenue, positive guest feedback, and wide demographic appeal have been drivers of the clients’ decision to re-invest and innovate in 2017, this time in an interactive technology with an XD Dark Ride 36 seats, the largest XD Dark Ride in North America. The exterior theming was accomplished with a specialized design firm: the building facade has been totally customised with zombies, giant signs and barbed wire fence in order to re-create the apocalypse environment of the film.

HOCO faced a decision whether to offer an attraction with a highly themed single content or one with rotating different content. The key factor in deciding was composition of the audience. The Niagara Region welcomes approximately 14 million visitors yearly, while the city of Niagara Falls welcomes approximately 12 million visitors. In such a popular tourist location where the audience is renewed every few days, it is not as crucial to offer several films options. At Clifton Hill in Niagara Falls, it was more beneficial to go with a single strong content that allowed HOCO to develop impactful theming components outside the attraction to attract guests. Conversely, if a regional attraction draws on a more limited visitor pool, it makes sense to offer a variety and diversity of content because repeat visits from the same guests will drive long term profitability. In such a case, offering several different adventures for returning guests is critical.