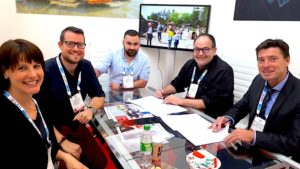 Zierer has a full order book to fill for 2019. Most recently as shown in the photo is a contract signed at the IAAPA Attractions Expo. It was for a Jet Ski with Fraispertuis Amusement Park in France on behalf of EAS in Amsterdam. Shown at the contract signing are, left to right, Yvonne Penzkofer, Back Sales Office, Zierer, Frédéric Beck, Project Manager, Fraispertuis, Patrice Fleurent’s son, Patrice Fleurent, Managing Director, Fraispertuis, and Martin Weichselgartner, CEO, Zierer. Other Jet Ski contracts were signed for delivery to China, Indonesia, the U.S., and one more for France.

Spirou Park in France will get a Star Shape from Zierer next season as a further supplement, and another Star Shape is currently under production for delivery to Asia. Various Family Towers are currently under production, including three for United States parks. One of them goes to Adventureland Long Island, which also has Zierer re-theming their Jet Skis and existing Lady Bug Coaster. Another Double Tower (Twin Towers) is in production for an amusement park in Great Britain.

Not only does Zierer’s Family Tower enjoys great popularity, but so does their Wave Swinger, which is an eye-catcher for every park. Not surprisingly, Zierer is currently in production of four Wave Swingers, two of them as a 56-Seater Baroque version destined for Asia. The other two Wave Swingers are 40 seater versions, one for Europe with a beautiful new oak tree theme, the other one going to Japan as standard Baroque version.

Several Family Coasters were ordered, including ones for Hungary and Ireland. Both countries are relatively new destinations for Zierer rides. Other Family Coasters are going to Belgium, the U.S., and Denmark.