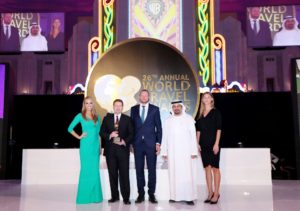 Commenting on the triple bill of accolades, Mark Gsellman, vice president of theme parks at Farah Experiences, said: “We could not be more thrilled to see our beloved parks win big at this year’s World Travel Awards. Voted for by members of the public, these awards are a testament to the world-class guest experience that we work tirelessly to deliver, day in and day out. Our commitment to guests is our highest priority, and it is imperative that we hold ourselves to world class industry standards to ensure that we can deliver some of the most unique, truly immersive, and fun-filled family entertainment the region has to offer”.

“Our three iconic theme parks make Yas Island an ideal destination for guests and travelers from across the globe – there’s something to satisfy all ages, tastes and interests. Every year, we proudly add to our list of achievements, channeling our success into further developments to create unforgettable memories for our guests from across the globe,” Gsellman continued.

The World Travel Awards were established in 1993 to acknowledge, reward and celebrate excellence across all key sectors of the travel, tourism and hospitality industries. Today, the WTA brand is recognized globally as the ultimate hallmark of industry excellence.