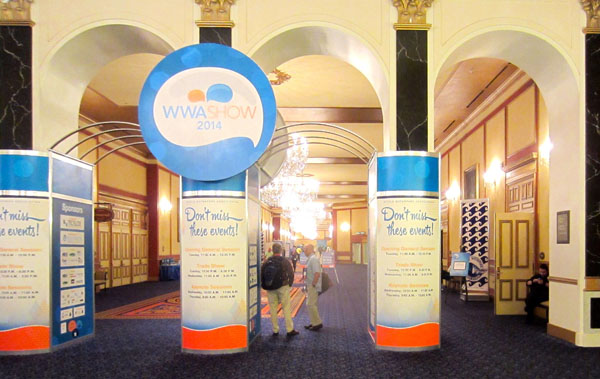 There were both smiles and frowns on the faces of the Kansas-based staff of the World Waterpark Association on the last day of the recent WWA Show in Las Vegas, writes Paul Ruben. Smiles because event was coming to a successful end. Frowns because their beloved Kansas City Royals had lost the seventh and deciding game in the baseball World Series the night before. 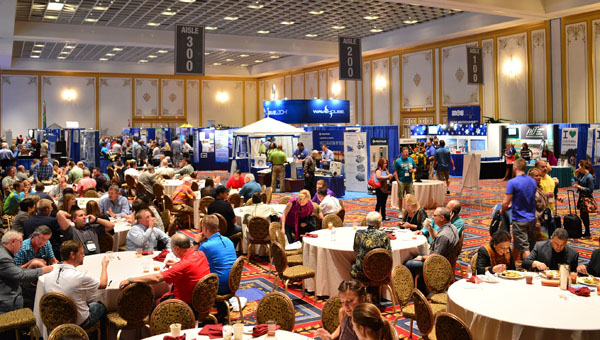 Held from 27 to 30 October at the Paris Las Vegas casino/resort, the 34th Annual Symposium and Trade Show of the World Waterpark Association (WWA) welcomed more than 1,600 waterpark owners, operators, developers, suppliers and designers – up 8% over 2013, when the show was held in West Palm Beach, Florida. It is also on par with 2012 in Vegas, one of WWA’s most successful events to date.

“We know that 2014 wasn’t a perfect season for all our operators, yet we’ve heard from members all over the world that they have big plans for the 2015 season and beyond,” noted WWA president Rick Root. “They brought their positive outlook to the WWA Show in spades and came together with fellow attendees to solve problems, craft solutions and get inspired.” 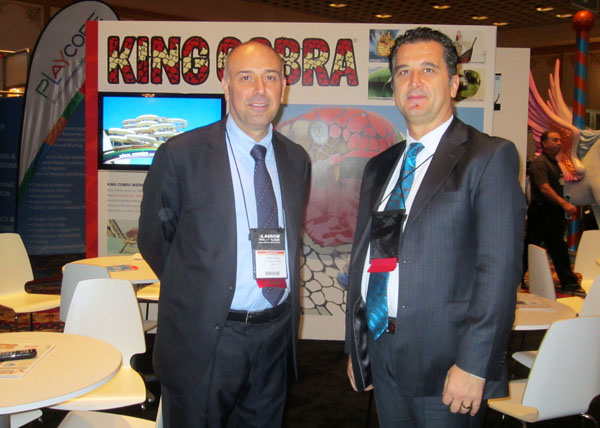 Flying the flag for Turkey were Bulent Ilkay and Baris Pakis

Not only was attendance up, but attendees appeared more motivated. “Engagement went through the roof this year,” reported WWA director of park member development, Aleatha Ezra. “The conversations were going on everywhere, at all times. We had record turnout for our lunches and networking events, standing-room-only in many of our sessions and we saw a 25% increase in attendee engagement across all our social media platforms during the week of the show.”

“Speaker knowledge in the waterpark industry is astounding and WWA features the great of the greats!” confirmed Hannah Jansen, Edgewater Resort & Waterpark, Duluth, Minnesota. “During the show, I was able to ask questions and seek answers from experienced operators like Mike Beatty at Disney, Cody Butcher with Great Wolf Resorts, Brian Czarnecki at Camelback Resort and Billy Hamilton with Wet ‘n Wild Orlando. They provided an opportunity to learn and a resource for the future.”

“After operating a waterpark for 40 years, I know it’s important to stay current,” said Kathy Siggers, owner of Wild Water Adventures at Clovis Lakes Clovis, California. “You have to be able to reinvent yourself and stay abreast of the latest best practices and that’s what this show offers.”
“I needed to get back in touch with the world of aquatics,” confessed aquatic historian Chuck Knoll. “I need to get back to the many people of WWA. They are the most visionary people in the aquatic world.”

“The camaraderie in the waterpark business is like no other,” confirmed Brian Czarnecki, Camelback Resort. “No matter what size waterpark you are, you can always learn something.” 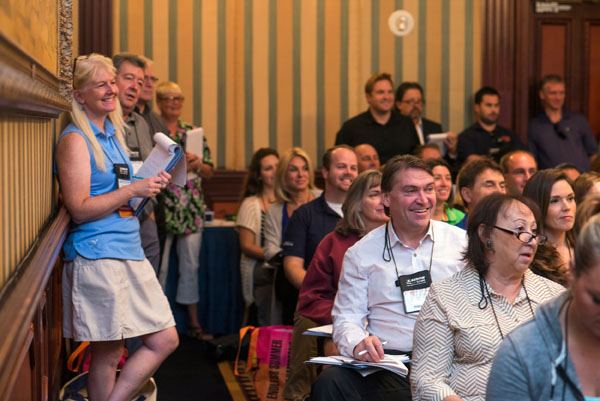 Three keynotes
First up with the keynotes was Ed Hart, an industry entrepreneur who has successfully revived three theme parks from bankruptcy and neglect to vibrant success, including the recently reopened Kentucky Kingdom in St Louis. Hart discussed the latest challenges in operating a waterpark, including legal and social issues. “Most important, with regard to incidents involving both guests and employees,” said Hart, “make sure everyone understands the need for accurate documentation. In doing so, adopt best standards for gathering and archiving the information. In the event you find yourself facing an unreasonable or frivolous lawsuit, good record keeping will allow you to defend your park and its reputation.” He also shared with attendees the challenge of reopening a park that had been shutdown for nearly five years. “It’s important to maintain an annual reinvestment programme for new rides and attractions. And always challenge yourself to find new ways to enhance guest experience.”

Next up was Robert Stevenson, a business professional with more than 25 years of applied experience in the fields of sales, customer service and building a corporate culture. During his keynote called “How The Best Get Better,” Stevenson shared humorous anecdotes, as well as some key service philosophies aimed at helping waterpark owners and operators give their guests the best experience from the front gate to the parking lot. “If you don’t like change you are going to hate extinction. Success comes to those willing to tweak, adjust or revise when necessary,” he said. “The day we forget we are in business for the customer is the day we start going out of business.”

Ending the keynotes on a strong note was Dr Justin Sempsrott with his presentation, “Drowning Resuscitation.” Sempsrott, who founded Lifeguards Without Borders and serves as their executive director, spoke about the misconceptions surrounding the treatment of drowning patients. “Drowning is a process, not an outcome,” he said. “Drowning is not caused by water filling the lungs, but rather by a lack of oxygen to the brain and treatment should be directed at providing oxygenation and ventilation as quickly as possible.” 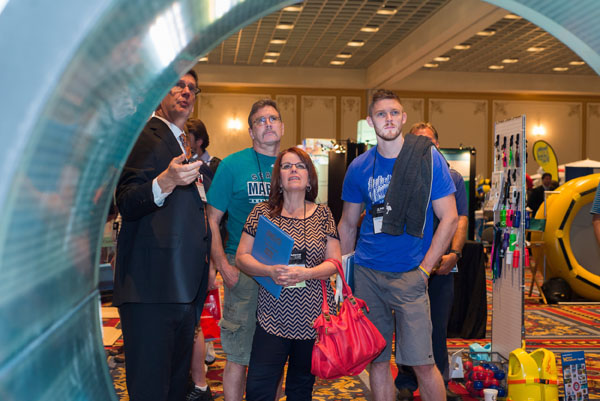 An excellent show,” summarised Terry Smith, Atlantis Aquatic Group. “It’s a lot of walking, but it’s good to put names with faces. I came to see what’s new on the market. WhiteWater introduced a new slide. Pentair has a new UV system to sanitize water. I like to meet with designers and come to Las Vegas.”

“I’m enjoying the show,” confessed David Andrews, Wet ‘n Wild Palm Springs (California), “and am looking to meet as many people as I can, and share ideas. I’m also looking to add to my staff. I thought the new WhiteWater LED slide, Slideboarding, was a very innovative product. We recently put in a FlowRider and got some ideas on how to engage the public and continue to market it.”

“This show has been great,” said Scott Cooper, Wet ‘n’ Wild Phoenix (Arizona). “I got some good information we can implement and save some money. We won an award for best website, so we came to collect the award, and Phoenix is very close to Las Vegas. It was an incredible experience to see all the new innovations out there and catch up with other industry professionals.”

“This show has been very good,” commented Ken Ellis, Aquatic Development Group. “We’ve seen many buyers, made some new contacts, and learned of new projects we had not been aware of. It’s been a strong year for us, as many parks are renovating.”

“The US economy has improved,” added WhiteWater boss Geoff Chutter. “Parks haven’t expanded in the past few years and think it’s now about time. We’ve also introduced an unprecedented number of new products to the industry this year, including the Rattler, Anaconda and Aquasphere. Slideboarding will be an industry game changer.”

“We’ve been real busy,” admitted Rick Hunter, ProSlide Technologies. “Established parks are looking to expand and are real buyers. We continue to push the envelope on LIM water coasters and our high-thrill feature rides like the Tornados and Bowls that constitute hybrid ride opportunities.”

“This is an excellent show,” acknowledged Wayne Miller of tube supplier Zebec. “Our family raft continues to sell well now for over 20 years. Our regular customers have come by and told us how happy they are with our products, and we’re now seeing many returning customers.”

“I love this show,” smiled Tom Dring from CORE Cashless. “We had the opportunity to reach the customers we needed in an easy, no pressure, intimate way.” 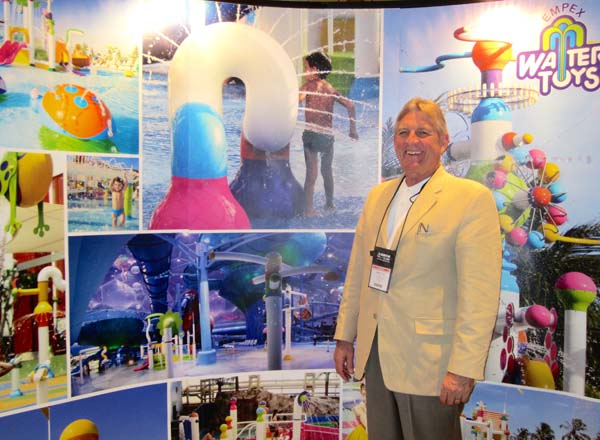 What happens off the show floor…
“We were pumped to be headquartered at the heart of ‘the entertainment capital of the world’,” concluded Root. “This host city really knows how to roll out the red carpet to visitors and what’s even more exciting is we were able to take folks to two amazing waterparks.”

Highlights of this year’s networking events included a Monday night tour to the new Cowabunga Bay where 175 attendees enjoyed an extensive behind-the-scenes access to this 23-acre property and its extensive theming, plus the Wet’n’Wild Las Vegas Party. Almost 700 attended the WWA’s signature Annual Reunion Party beneath the sparkly lights of Paris as Vegas own Eiffel Tower, ending the first day of trade show shopping with a bang. Meanwhile close to 70 gathered at Painted Desert Golf Club for the WWA’s Annual Golf Tournament.

The Association has already announced they it welcome attendees to Palm Springs, California in 2015. Headquartered at the Renaissance Hotel/Palm Springs Convention Center, the dates are 20 to 23 October. See you at the Reunion Party? 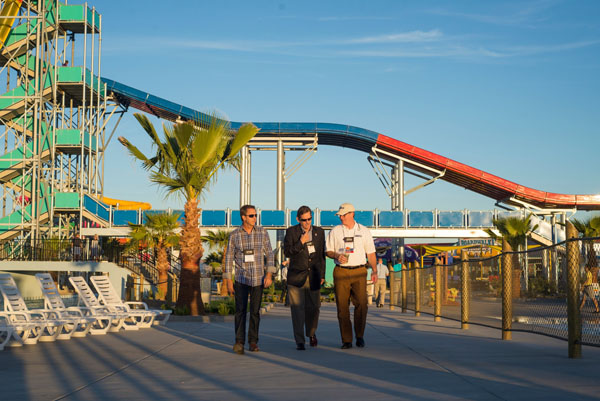 How’s THIS for a Ghost Train?