As a precursor to the DEAL trade show, the World Waterpark Association (WWA), which held its latest Middle East Symposium in the Ras Al Khaimah suite of the Dubai World Trade Centre (DWTC) on April 24 and 25. Owen Ralph reports.

In opening this, the association’s second Middle East conference, WWA president Rick Root remarked that he was very pleased with the turnout following last year’s curtailed event when, “it just didn’t seem like the right thing to do.”

This was in fact the third WWA Symposium of the year, following spring meetings in the US and Germany. Waterparks are popular in the Middle East, of course, because of the climate and Dubai is home to two very popular facilities, Wild Wadi and Aquaventure at Atlantis. Large delegations from both parks were represented at the two-day conference.

Delivering one of the opening sessions was WWA stalwart Roger Currie from Aqua Leisure International, who also covered for an absent David Camp of AECOM. An industry still in recession, noted Currie, is facing the challenge of how to balance guest experience with operational need. “After years of expansion it is time for reflection. Retro-fit and upgrade are the fastest growing sector.”

Nevertheless, the range of slide and attractions available to waterpark operators is greater than ever before. Attractions that integrate viewers and queuers with riders are popular, as are rides with shared participation and combinations of different attractions. Many of these themes were reinforced later in presentations by Jeff Jannovitch of ProSlide and Andrew Wray from WhiteWater West.

Due to open any day now is a waterpark that will swamp both Wild Wadi and Aquaventure in size. Located less than an hour from Dubai in the Emirate of Ras Al Khaimah, Ice Land is part of the WOW RAK resort from Polo Consulting of India. Speaking at the WWA event, Polo’s Balwant Singh Chawla revealed his recipe for success, which involves packing in low paying guests in large numbers. “The West doesn’t see the big market,” he remarked.

By definition, Ice Land’s pricing will not be as competitive as Polo’s Fun ‘n’ Food facilities in India, but it does boast massive capacity, which is why Chawla confidently predicts a maximum waiting time of 15 minutes for any of its attractions. Maybe this will become a new standard for the United Arab Emirates (UAE) as, according to WWA vice-chairman Glenn Davidson, that is the target in Abu Dhabi, where Davidson is helping Aldar Properties with its plans for a waterpark at Yas Island, home of Ferrari World.

Sharing his experiences from Wahooo! Waterpark in Bahrain, Damien Latham explained the challenges of developing a water-based attraction on the top of a shopping mall: “If there are any leaks the first person who will come knocking on my door is Debenhams [department store] down below!” 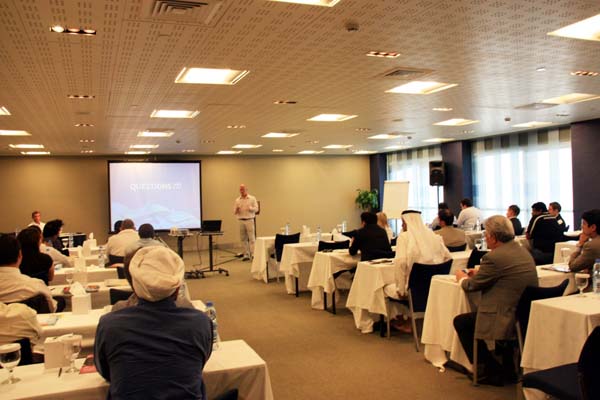 Thanks to its “must see” location on The Palm Jumeirah, Aquaventure at Atlantis has become a popular Dubai attraction since it opened 18 months ago. During his presentation, waterpark manager Scott Deisley gave an honest account of some of the fine tuning he and his team have made along the way. Symposium guests could discover this first hand during a behind-the-scenes tour at Atlantis that night, followed by a networking dinner.

The next day’s seminar programme kicked off with presentation on leadership by Beth Standlee of Trainertainment, followed by a session on guest service from Shaun McKeogh of Ferrari World Abu Dhabi. Shaun’s colleague Wayne Meadows chaired a panel discussion on creating a culture on safety, followed by a closing Q&A with contributions from Wild Wadi’s Chris Perry, Wahooo! Waterpark’s Chris Trickler and Farah Leisure Parks’ (Ferrari World) Victor Pelsmaeker.

WWA attendees were then free to pop downstairs to tour the DEAL show floor, or join optional tours to Sega Republic at Kidzania at the Dubai Mall. Later that evening, the WWA rounded off proceedings with a tour and get-together at Wild Wadi, networking being an important part of the association’s business.

The World Waterpark Association will hold its 30th annual Symposium in San Antonio, Texas, from October 6 to 10, including a supporting trade show on October 8 and 9. A third Middle East Symposium is muted for spring 2011, details to be confirmed.

Pictured below: WWA delegates assemble for a group photo at Atlantis 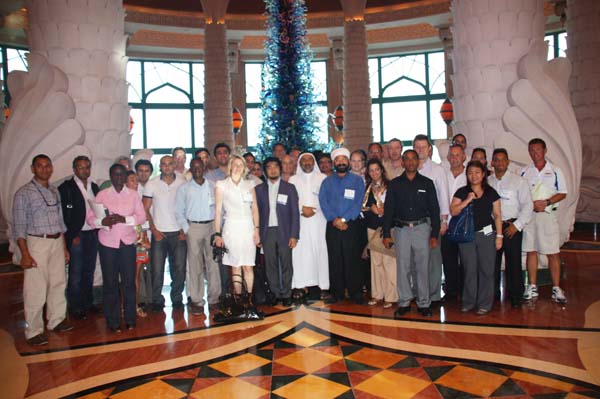