think the seminars I attended were the best ever,” declared Steve Rodgers of Golfand SunSplash in California, and a delegate at the first meeting of what was then the American Waterslide Association. “I have been in the waterpark business since 1977 and I’m still learning new ideas that I can take home and adapt to our park.”

“We received very positive feedback from attendees,” confirmed WWA president Rick Root. “The great summer weather meant a solid season for many parks in the US and our show attendance reflected that, with a strong showing from first-time attendees.”

Taking place at San Antonio’s Hyatt Regency hotel from October 6 to 10, “This year’s show also provided a unique opportunity to look back at how we’ve developed as an association and an industry over the last 30 years,” said Root. “It reminds us how quickly the waterpark business has evolved. The WWA and our member network offer a vast resource to this unique industry, allowing us to share knowledge and experience and provide the necessary tools to successfully manage future change, face new challenges and drive growth.”

As always, WWA attendees came to be inspired, informed and motivated during the Symposium’s extensive educational programme. This year’s event offered more than 50 different sessions covering a wide range of topics.

“I was blown away. It was my first time and I definitely took advantage of the education,” said Trevor Leonard, of Six Flags White Water in Georgia. “I was surprised by how willing people were to share ideas and best practices.” 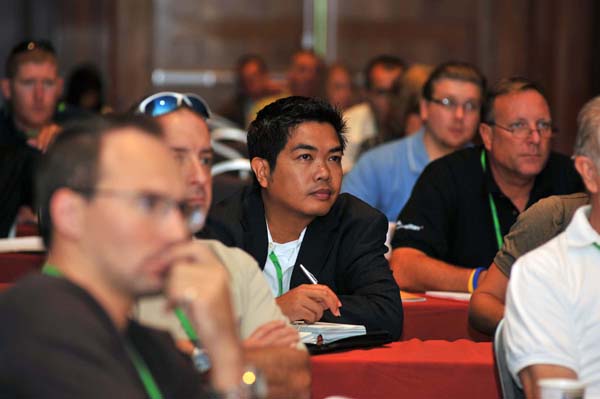 “Each year we work hard to bring to new ideas on safety, marketing, operations, staff development, standards and more to the forefront because we know how much these areas impact the daily success of our member facilities,” highlighted co-chair of the WWA education committee, Chris Landgrave from Indiana’s Deep River Water Park.

In total, 109 speakers appeared at WWA’s 2010 workshops and symposium sessions. Sessions covered hot topics including revenue management, sponsorships, group sales, staffing and training teens to act like adults. There was even a session entitled, “What Seinfeld Taught Me about Aquatics.”

In the Smaller Park Meeting led by Steve Miklosi of Breakers Water Park (Arizona) and Steve Strong of Lenape Valley Swim Club (Pennsylvania), the issue of how to handle weight limits for waterslides was discussed. How, for example, do you discreetly question a person’s weight? It was suggested to hold events for women only, including inviting appropriate vendors, with a portion of the proceeds going to a women’s charity. Events for teens, such as a beach party with a DJ, were also suggested.

In the last 30 years many of the industry’s most innovative products have been launched at WWA. This year’s accompanying trade show, on October 8 and 9, continued that tradition, with 220 companies exhibitors exhibiting their wares, from pumps and filtration equipment to slides and rides.

“I was impressed by all of the new products I saw this year,” said Joe Gibbons of Leisure Consultants. “The continued commitment to high quality and innovative product offerings is great for our industry, especially for parks outside the North American market.”

Several new attractions and product innovations were unveiled at WWA, including King Cobra, a side-by-side, double tube waterslide by Polin Waterparks and Pool Systems of Turkey. SplashEnhancements is a series of waterslide enhancements by SplashTacular, including lighting effects, racing elements and blendable translucent colours within fibreglass to enhance theming and guest appeal. A selection of thermoplastic staircases, trussing, decking and other products made using STF & TPF Plastic Technologies were introduced by Water Safety Products.

“This show was good because we are relatively new in the market,” said Polin’s Kubilay Alpdogan. “We have achieved 54 projects in North America so far, but this year the show was slow compared to previous years but still some important leads were there. Many large park operators stopped by and were amazed by our King Cobra.”

“I’ve been attending WWA since this start 30 years ago,” smiled Frank Aragona of Zoom Flume Waterpark, East Durham, New York. “This will be my last year and I expect to be recognised. My son is taking over the business; I’m retiring. We come to see what’s new, network and talk to people I’ve known for 30 years.”

“I’m here for the education sessions,” revealed Sundae Hein of Killeen Parks and Recreation in Texas. “This is the first year our waterpark has been open and we’re looking for insight.”

“We like to keep up on what’s happening in the industry, for both our consulting company and our park,” admitted John Turberville, Waterville USA (Alabama). “At this particular show we did a presentation on risk management, how it affects the bottom line, and how it relates to your insurance.” 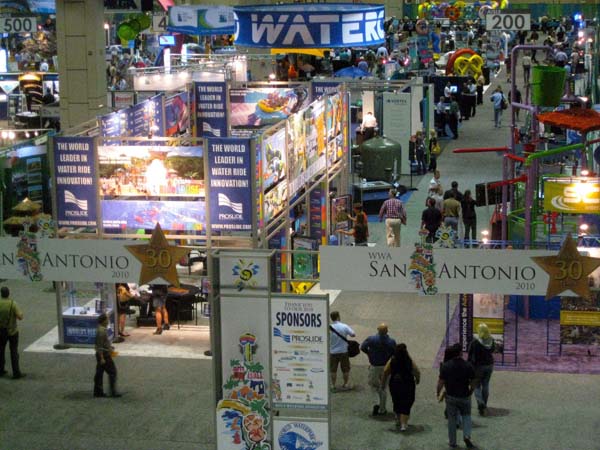 “It’s been a good show,” acknowledged Geoff Chutter of WhiteWater West, “primarily because of the eight new products we introduced this year. The Abyss is the largest funnel slide. Our Megatube series inclues the Viper, to be installed in NRH2O Waterpark in Texas. The Python goes to Amazon Falls in Thailand, the Rattler to Yas Island, Abu Dhabi, and the Constrictor to Wet ‘n’ Wild, Phoenix, Arizona. Our Flume-in-Flume is being installed in Bali Waterpark, China. The Anaconda and Mamba slides will got to parks to be announced.”

“The show has been pretty good for us,” agreed Kenny Handler of Profitable Food Facilities. “The quality of the leads are stronger this year than in the past. There seems to be a more positive atmosphere.”

“People have had a good summer and the entrepreneurial spirit is alive and well,” admitted Rick Hunter of ProSlide Technologies. “There are some quality buyers here. Even with the tough economy, people want to get back into things and add an attraction.”

“The show has been very good,” confirms Scott Snyder of tube supplier Zebec. ” We recently purchased one of our competitors, Talburt Associates. Pat and Ester Talburt were here at the show, which gave us a chance to meet with their customers. Seems like most of the people we’ve talked to are very serious. And we like San Antonio; it’s been a good draw. ”

The WWA has confirmed that its 31st Symposium & Trade Show will take place from October 3 to 7 next year in New Orleans, a popular choice thanks to the city’s eclectic mix of history, food and music. Ahead of this, a Middle East symposium is planned in Dubai on April 3 and 3, in conjunction with the DEAL trade show.