To celebrate its 130th anniversary season in 2013, the Swedish amusement park Gröna Lund is to launch the world’s tallest Star Flyer, courtesy of Funtime.

Standing at 121-metres in height (400ft) the SEK50million ($7.9m/€5.8m) attraction), named Eclipse, will be the latest breathtaking ride at the park to overlook the Stockholm waterfront. Already an S&S shot tower, Intamin drop tower and a number of rollercoasters punctuate the park’s skyline.

“Eclipse takes thrills to new heights”, says ride manager Peter Osbeck, “offering guests a 360-degree, bird’s eye view of the capital of Sweden. Not everyone will dare to ride it, but those who do will admire a fantastic view across Stockholm. Luckily it has double seats, which means you’re not alone up there.”

The 24-seater attraction will feature 12 swings that hang on 8m-long (26ft) chains from the star-shaped structure that is winched up and down the ride’s tower. During the ride, passengers will reach speeds of up to 70km/h (43mph) as they turn around and fly out from the tower. The theme chosen for the ride is “Steampunk” – a mix of nineteenth century architecture and science fiction with inspiration from Jules Verne and HG Wells.

The new ride is already under construction opposite Gröna Lund’s main stage, where it replaces the Extreme (Mondial Top Scan). The world’s tallest Star Flyer is currently the 110m ride operad by Funtime itself at the Prater in Vienna. 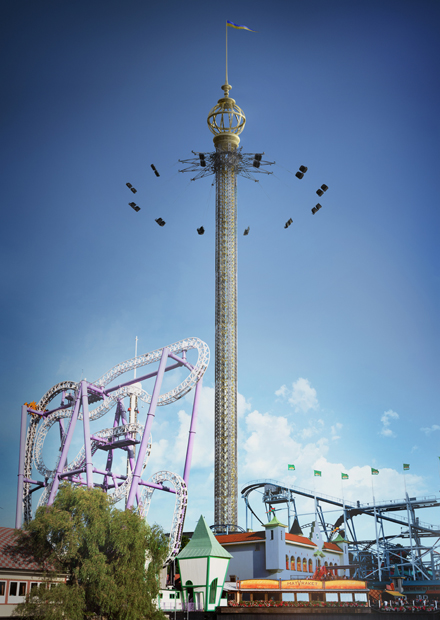