Designed by The Gravity Group, Wooden Warrior at Quassy Amusement Park is a tidy 1,250-feet-long (381-metres) with a maximukm height of 35ft (10.5-metres). Paul Ruben reports.

This new addition to the park in Middlebury, Connecticut, delivers rather more than its modest spec suggests.

“Our new rollercoaster is a family ride,” says Quassy co-owner George Frantzis II, “one that parents and grandparents alike can ride with children.”

Frantzis is being modest. It is so much more. It feels faster than the reported 35 mph. The pacing is superb. It rides better than most coasters twice its size. It is exhilarating, with trainloads of smiling riders returning to the loading station. This is a pint-sized major league thrill machine.

Wooden Warrior’s layout, a dog-legged out-and-back that crosses over the park’s miniature railroad twice, is one of the secrets of its success, but much of the credit may also be due to its new 12-passenger ‘Timberliner’ train, the first of its kind installed on a new ride in the United States. The lightweight steer-axle trailer cars, which were tested on The Voyage at Holiday World in Indiana, are comfortable and ride effortlessly over the layout. Identical trains have just debuted on the Twister at Gröna Lund in Stockholm, Sweden, and some 24-seat Timberliners will open later this year on the Racer in Happy Valley Wuhan, China.

The immediate success of Wooden Warrior belies the courage it took to build it for a small park like Quassy. “After reviewing submissions from a half-dozen coaster builders, both steel and wooden,” explains park president Eric Anderson, “we decided that an all-wooden coaster would be the best fit for Quassy Amusement Park. Based on our demographic, we knew we were looking for a ride that could be ridden by all age groups and a woodie would be considered a classic ride.”

Though it may be considered a junior coaster, Wooden Warrior features several unique and exciting elements, making it a one-of-a-kind experience. “From the incredible airtime, tunnel and banked turns, it’s rather amazing how The Gravity Group fit such an exciting ride in our limited space,” adds Anderson. “It’s definitely become our signature attraction.”

“Since we announced a few years ago that we would be constructing the ride, the park immediately drew international attention from coaster and park enthusiasts. Interest started building locally since ground was broken last summer and now the ride is open, it’s the positive buzz of the community and topic of conversation everywhere I go.”

The last wooden rollercoaster to operate in the area was located at Westbury’s Lakewood Park. Built in 1930, the coaster lasted only a few years before being dismantled and moved to Canobie Lake Park in Salem, New Hampshire, for the 1936 season. The ride continues to operate in New Hampshire today. 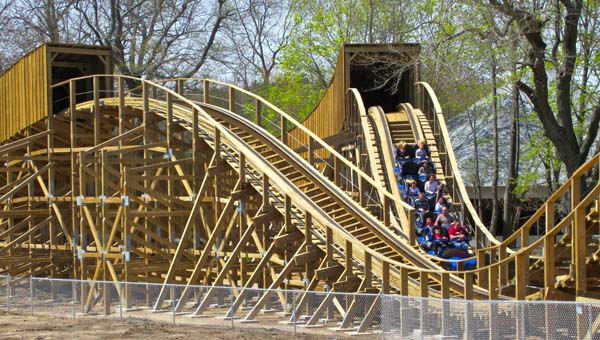 But now it’s Quassy’s time to shine. Standing in the Wooden Warrior loading station, you can see the joy in the riders’ faces. “The ride exceeded our expectations in all departments,” Anderson confesses.”We knew it would be a good ride, but it has turned out to be a fantastic attraction – no doubt. The steady stream of positive comments continues to pour in.”

“I’ve ridden the coaster numerous times,” he continues. “Every seat offers a fantastic and different experience, with a lot of that attributed to the Timberliner train. I’ve never experienced a woodie that corners this smoothly. Granted, it’s new, but the Timberliner is delivering as promised in all aspects. Everyone raves about the incredible amount of airtime on the ride – something that is rare on a coaster of this size.”

Fallout from the coaster’s success has been immediate. “The publicity surrounding the new coaster has been incredible,” Anderson reveals. “The Associated Press ran a national story recently that has been in newspapers everywhere and we’ve been getting television coverage from the network affiliates. We are getting correspondence from all over – including Europe – that people are coming to Quassy this year to experience the ride. Yes, it will be an attendance driver, we are confident of that. The Wooden Warrior now puts Quassy – a traditional family park – in the limelight.”

Building a new ride in New England is never straightforward, and the coaster’s construction was not easy. “We broke ground last August,” Anderson recalls, “actually a little ahead of our anticipated schedule. New England just came off its worst winter in history with record snowfall. The construction crew kept on schedule despite the horrible weather and the many challenges it presented. We also had to deal with some soil and unforeseen drainage issues onsite.”

Anderson has high praise for The Gravity Group. “Their team has such passion for what they do you can’t help but get excited when you talk to these guys about any project they are involved in. That really drove us to them when decision time came to choosing a vendor. They presented an initial project and had to submit and entirely new plan when we realised the first coaster would not work in the area we had chosen. Did they deliver? Yes, on time and under budget.”

Wooden Warrior’s a great ride that packs a lot into a small package. Who says size matters?