A breathtaking 360-degree multimedia spectacular, Wonder Full at Marina Bay Sands lights up the Singapore sky each and every night, acting as a beacon across the bay.

The epic production was created by Laservision, an Australian specialist in large-scale multimedia spectaculars and architectural illumination, whose other credits include the Victoria Harbour laser show in Hong Kong. The vision for Wonder Full was conceived by Las Vegas Sands Corporation president Michael A Leven, who requested, “a show with a soul.”

A team of 100, including specialists in architecture, design, engineering, music and IT and other technical/creative skills, was assembled from Laservision’s offices in Australia, Hong Kong and Singapore.

“I’m extremely proud of our team who brought all this together,” says Laservision founder and CEO, Paul McCloskey. “We’ve been producing spectaculars now for 30 years around the world and this is the jewel in our crown.”

Wonder Full is a show about life, and begins with a single drop of water that sets a tumultuous chain of events are set in motion – a storm in which ideas and reality are conceived and then carried on the wind. Then day begins and life takes form. Seeds sprout, flowers bloom and a child are born.

The show progresses to the bold and daring world of teenagers taking risks, making friends and eventually falling in love. In love comes the bonds of commitment that leads to marriage, and the next generation springs into life.

Images of people from around the globe encourage the audience to celebrate the world around them and finally the show transforms into a breathtaking arena of light as the eagle – symbol of rebirth – flies across the sky towards the Arts Science Museum and then breaths life back into the signature towers of Marina Bay Sands.

Used in the show are 15 high-powered Stella Ray and Light Ray laser systems producing beams of light strong enough to be seen for up to 55km. As part of the programming process, flight paths were analysed in conjunction with the Singapore Civil Defense Force and Civil Aviation Authority of Singapore to ensure pilots did not encounter misdirected lights or lasers.

As the production relies on a range of cutting edge and sophisticated mediums, Laservision felt it was not necessary to incorporate an arsenal of pyrotechnics to provide the “wow” factor. This means Marina Bay, which is a drinking reservoir, is free of any falling debris that could comprise the quality of the water. On special occasions that call for extra celebration, such and Chinese New Year and National Day, “zero fallout” fireworks will be used to minimise the environmental impact.

Both the high definition video projectors and the water screens are mounted on floating barges, which rise and fall with variations in the water level whilst remaining perfectly aligned. The entire show can also be operated by an iPhone or iPad from anywhere in the world.

The original music score composed for the show was recorded by the 140-piece Bratislava Symphony Orchestra, incorporating strong Asian elements using the Indian flute, erhu and guzheng. Played out on a 50,000-watt surround system, the soundtrack is also transmitted to the wider bay area via FM radio.

Wonder Full lights up the waterfront outside Marina Bay seven nights a week, including two performances from Thursdays to Sundays and three times on Friday and Saturday evenings.

Owned by the Las Vegas Sands Corporation, Marina Bay Sands is one of two casino resorts developed in Singapore since the loosening of local gaming regulations. The other is Resorts World Sentosa, which incorporates the Universal Studios Singapore theme park.

Sitting across the bay from the Singapore Flyer and the city’s many skyscrapers, Marina Bay Sands’ distinctive profile is composed by three interconnecting towers. Spanning the top of the entire structure – 200-metres above Singapore – is the Sands Skypark, including a 150-metre infinity pool, observation deck and restaurants. Inside are over 2,500 hotel rooms, a convention centre, upscale shopping mall and, of course, a casino. Also featured are the ArtScience Museum and an event plaza hosting theatre shows including a resident production of The Lion King. 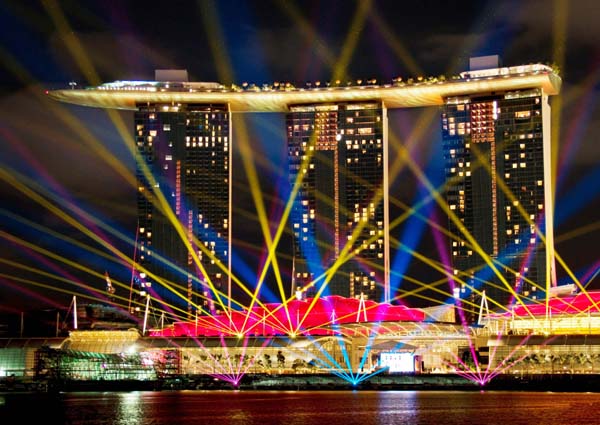