More than five years in the making, The Wizarding World of Harry Potter at Universal Orland Resort was unveiled to an eager crowd on June 18.

Built at an estimated cost of US$265 million, this spectacularly themed area is the newest island at Islands of Adventure theme park.

Inspired by JK Rowling’s fantasy tales and characters, the 20-acre venue is faithful to the Harry Potter books and films. Fans of the franchise can tour Hogwarts castle, shop in Hogsmeade village and dine in the Three Broomsticks pub. They can can also fly with Harry on a major new multimedia attraction, ride on a dragon-themed rollercoaster or sample “Butterbeer” and exploding sweets.

“We have created a special place unlike anywhere else in the world,” believes Universal Parks and Resorts chairman and CEO, Tom Williams. “The adventures of Harry Potter are among the most popular of our time, and we are bringing them to life. Guests will feel as if they are in the movies with Harry and his friends.”

“I said right at the beginning, either we do it right or we don’t do it at all,” adds JK Rowling herself. “The teams at Universal and Warner Bros have done it right, so I am so happy.”

Arguably, the Harry Potter stories are a ready-written theme park experience. “The fiction, the books and the films contained everything a great theme park has to offer, including memorable characters, exciting storylines and extraordinary locations,” highlights Theirry Coup, vice-president of Universal Creative.

The heart of The Wizarding World of Harry Potter is Hogwarts Castle – visible from everywhere within Islands of Adventure. Within the castle is a signature new attraction, Harry Potter and the Forbidden Journey. The ride, which plays out on Robocoaster vehicles in front of bespoke film content, takes riders on a “flight” over Hogwarts, where they narrowly escape a dragon attack, have a close encounter with the Whomping Willow and get pulled into a game of Quidditch. 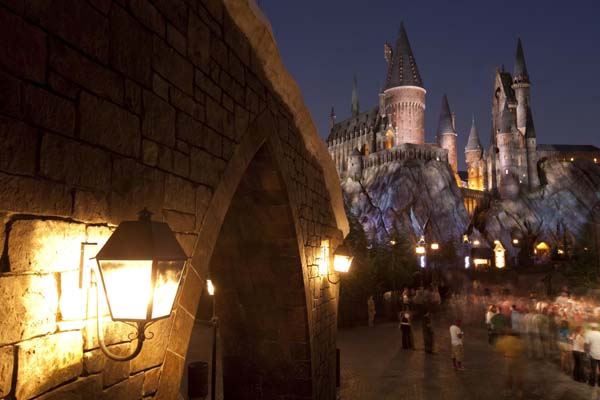 “Harry Potter and the Forbidden Journey is the heart of the Wizarding World of Harry Potter,” confirms Coup. “This all-new ride experience combines powerful story telling with spectacular new technology. The journey begins as you approach Hogwarts’ wrought iron entry gates guarded by the iconic winged boars. Guests then enter Hogwarts for a tour of the castle and some of the most iconographic places seen in the Harry Potter movies. They get to meet the four founders of Hogwarts for the first time ever – and are greeted by Professor Dumbledore in his office and encounter Harry, Ron and Hermione in the Defense Against the Dark Arts classroom. Then, they go on an incredible flying adventure along with Ron and Harry and run into other characters like Hagrid, Draco Malfoy, The Weasley Twins, Ginnie Weasley, Neville Longbottom, Professor Dumbledore, and creatures such as Acromantula spiders, a Horntail Dragon and Dementors. This is one of the most exhilarating experiences ever created.”

Also integral to the Harry Potter theme park experience are several themed food and retail opportunities. For example, visitors can experience the mischief of Zonko’s, the magic of Ollivanders or stock up on branded merchandise from Filch’s Emporium of Confiscated Goods or Dervish and Banges. Food and drink is available from the Three Broomsticks or Hog’s Head pub, or guests can sample the unique taste of “Butterbeer.” Souvenir letters can be sent from Hogsmeade at the Owl Post.

Further ride experiences include two rethemed rollercoasters. Dragon Challenge, formerly Dueling Dragons, is Islands of Adventures’ famous twin B&M inverted coaster, while Flight of the Hippogriff from Vekoma may be familiar to some guests as the former Flying Unicorn ride.

Coup explains some of the new themed elements: “Dragon Challenge allows guests to experience the Triwizard Tournament. They make their way past the ‘Goblet of Fire’ and ‘Golden Eggs’ and eventually on the Dragon’s Den. There they must choose which dragon to face: a Hungarian Horntail or a Chinese Fireball. On Flight of the Hippogriff, guests wander through Hagrid’s Pumpkin patch and around Hagrid’s hut and learn from Hagrid how to ride a Hippogriff, a half-eagle, half-horse creature.”

“I remember when I was shooting the films, I absolutely wished this world could be real and that I could be a part of it,” says Daniel Radcliffe, the actor who portrays Harry Potter in the film series. “It’s amazing that people will finally get to do that and realise everything they’ve seen on screen.” 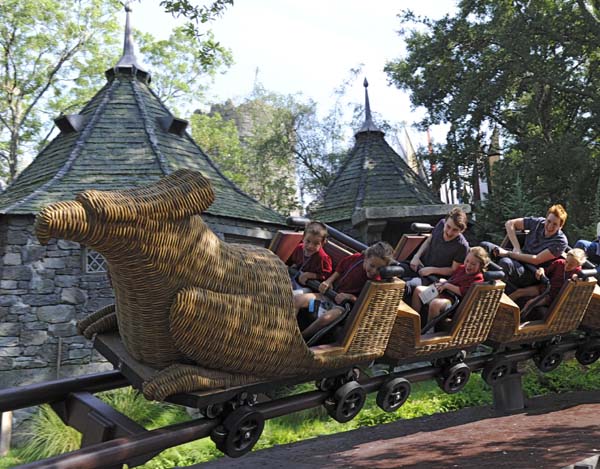