Due to open this coming spring at Inselsberg Funpark near Frankfurt is a new attraction from Wiegand called the Wie Flyer.

The ride is essentially a suspended version of the company’s popular Bobkart. Passengers ride in glider-style twin seater vehicles beneath a rail at up to 20mph (32km/h). The rider in the front controls the swing, while the passenger in the back controls the speed. An automatic distance control prevents collisions with other vehicles. As with many of Wiegand’s products, the steel rail is galvanised, ensuring minimum maintenance.

On launching the ride recently at IAAPA in Orlando, Wiegand encountered an encouraging reception and the company’s Jürgen Ruschke says he anticipates the product appealing to more parks than the Bobkart. The debut model at Inselberg will include 500-metres of track (as pictured below) and be operational in time for the start of the season in March. 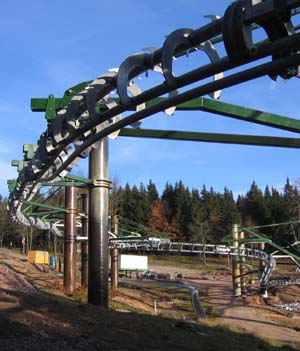