Why I love VR (the Virtue of Reality) 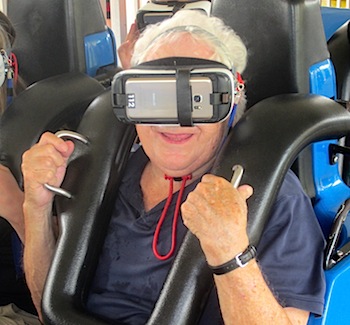 If they are frightened during a rollercoaster ride, passengers will close their eyes and the fear is diminished. I’ve always contended that the visual experience on a rollercoaster is half the thrills.

The ever-changing G-forces create the remainder of the thrills. So when virtual reality (VR) was added to the coaster ride I wondered if it would add or detract from the experience.

After trials by MackMedia and VR Coaster at Fun Spot in Orlando during IAAPA Attractions Expo in 2015, Six Flags added VR last season as an option on a number of coasters across its portfolio. Various operators in Europe rolled out systems too, including MackMedia at Europa-Park in Germany (of course), Merlin Entertainments at Alton Towers in England and Parques Reunidos at Bobbejaanland, Belgium. Many more will follow in 2017.

In each instance, you can ride with or without VR. I chose to ride Steamin’ Demon at Six Flags Great Escape (New York) for its New Revolution Virtual Reality Coaster experience. Steamin’ Demon is an early Arrow Corkscrew coaster that began life as the Ragin’ Cajun at Ponchartrain Beach in New Orleans back in 1978. When the park turned out the lights in 1983 it was moved to The Great Escape and renamed. After 38 years it was showing its age, with the older style over-the- shoulder restraints boxing your ears as you rumbled along the track. ‘Flags was smart to add VR to this ride, as it reignited interest in the coaster while simultaneously slowing cycle time. Once again, there was a line waiting to ride. While the ride was old, the experience was new. It was like a new attraction at a fraction of the cost.

Now you know sometimes I may mess with you, but what follows is absolutely true. Seated in the next to me at The Great Escape was Jessica Hansen, the park’s public relations manager, I removed my eyeglasses and was given a Gear VR headset fitted with a Samsung Galaxy S7 phone. The headset had a black cushioned pad that ran across around my eyes and over the bridge of my nose to keep me from poking my eyes with the lenses facing the phone’s video screen. As we rolled out of the station the screen came to life.

This was great! I was no longer on a coaster but inside the cockpit of a fighter jet on a launching dock. Climbing the lift hill, the scene made me feel like I was rising through a launching tube and was able to shoot at targets in the tube by tapping the touchpad on the side of my headset. I’m not much of a gamer, so I didn’t hit much. Cresting the top of the lift hill, my fighter jet dove into a cityscape as I began to swoop into a loop. The track jiggled a bit, my headset was buffeted by the over-the-shoulder restraints, and my view went black.

My view stayed black for the remainder of the uneventful ride. I sensed a corkscrew curve. There were more head-banging bumps. We slowed to a stop. I took my headset off and immediately saw what the problem was. The cushioned pad had been displaced by the head bump and had dropped into my line of sight. All I saw for most of the ride was the black pad. It was like riding with my eyes closed.

Jessica asked if I would like to ride again, but I passed. When it comes to coasters, I’m old school. I want to see where I’m going. Virtual reality? Maybe for some, but I prefer the real thing.