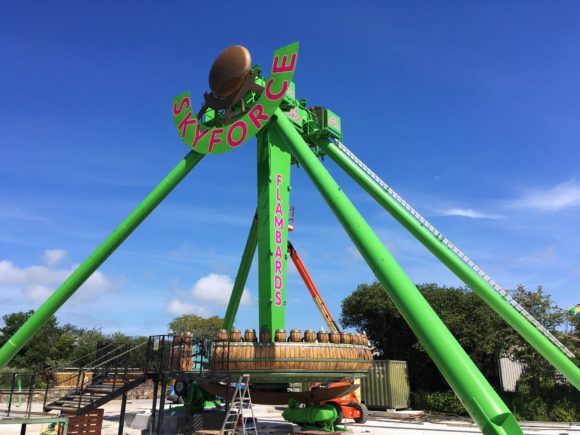 Flambards Theme Park is all set to welcome its latest attraction, a new white-knuckle ride named Sky Force. The park, located in Cornwall in the UK, is hailing Sky Force as “the first genuine white knuckle ride in the South West”, which is set to open at the Helston park later this summer.

Suspended on a set of four giant 18-metre metal legs, the Frisbee-shaped ride exerts the equivalent of up to 3G in force on passengers while swinging them in a pendulum motion and simultaneously spinning through 360 degrees. Weighing in at more than 56 tonnes, the ride was transported to the park using five articulated trailers; one of which had to have a special extension in order to carry the 18-metre legs.

Sky-Force has been assembled by a team made up almost entirely of Cornish companies and sits on a 100-tonne base of reinforced Cornish concrete. Tremain Plant Hire carried out the groundworks, Frewfix were responsible for the shuttering and concreting for the feet, Devoran Metals supplied the steelwork for the bases, Chris Brown provided the concrete pumping lorry and Chris Massie designed the ride bases.

Jon Douglass undertook the topographical survey and set out all the bases, the ride was painted by Blast Clean, transported by R and R Transport and the cranes were provided by Macsalvors.