Paul Ruben heads down to the Jersey shore to check up on new attractions for 2013 and examine the rebuilding efforts made by various parks since Hurricane/Superstorm Sandy last fall (autumn).

Of all the amusement parks struck along the US East Coast last October when Sandy slammed into the shore, it was two piers along the boardwalk in Seaside Heights, New Jersey that suffered the worst devastation. A 75 x 35ft (23 x 11m) portion of Funtown Amusement Pier was washed away. Six rides fell into the Atlantic Ocean, including a Schwarzkopf looping coaster, a bungee tower, go-kart track, Wisdom Tornado and Dartron Hang Glider, while a building housing arcade games was washed away. Damage was so severe that the pier will not reopen until the 2014 season.

Nearby, at Casino Pier, a 70ft (21m) section was also torn apart, launching several rides into the surf. Lost were the Star Jet rollercoaster by Miler, Stillwalk Manor dark ride, a Reverchon flume, Bertazzon Musik Express and the Centrifuge building containing an Eli Bridge Scrambler. The coaster was removed from the ocean in the mid-May and the rest of the rides are now being pulled out as well.

“The reconstruction is going well,” marketing manager Maria Mastoris tells Park World. “We were open Memorial Day weekend (24-27 May) and every weekend after that with the Breakwater Beach Waterpark,Casino Arcade, Pier Grill, Pier Surf Shop, rooftop mini golf and the midway games.”

When Park World was in town back in June, the boardwalk portion of the pier was open but the pier itself remained fenced off with just a handful of rides in place, construction equipment randomly positioned, and gaping holes in the deck. Rides were either in shipping or in storage, awaiting installation and New Jersey state inspection, never an easy hurdle. But, Mastoris informs us, the lower deck opened on 26 July and will remain open for the rest of the summer.

Originally opened in 1960, Casino Pier housed 38 rides, as well as a rooftop miniature golf course, concessions stands and boardwalk games. Of those, 17 rides are planned to operate during the 2013 season. Included are two new attractions, a Surf Shack (fun house) from Owens Trailers and the aptly-named Super Storm (Super Miami) by Technical Park.

The Storino family, owner of Casino Pier, has hired JRA (Jack Rouse Associates) to provide masterplanning and programming services for phase I of the two-phase rebuilding effort.

Guests visiting Morey’s Piers in the Wildwoods this summer will enjoy new and improved attractions including a makeover of the Zoom Phloom flume ride featuring hand carved rockwork seals and sea life and the freshly renovated Boat Tag ride on Adventure Pier. On Surfside Pier, visitors can check out the new Soggy Dollar Beach Bar at Ocean Oasis Waterpark, accessible from the beach or boardwalk.

Morey’s Piers have also embarked on something of a departure from the traditional seaside amusement park offering with the addition of artBOX (pictured) at Adventure Pier. A 10,000 sq ft artists’ colony crafted from 11 re-purposed shipping containers, it features five studios for local artists, a café serving fresh sushi, a museum shop and a space for live music.

Together with Jack Wright from Exit Zero Publishing/Museum Shop, Jack Morey is one of the key people behind the concept: “artBOX is quirky, nostalgic, cutting edge, and a true celebration of the visual and musical arts at the Jersey Shore … just the thing that belongs on the Wildwoods Boardwalk,” he says.

One of the first exhibits to go on display at artBOX was a giant replica of a tribute painting created by 11 year-old “celebrity artist” Autumn de Forest to honour the rebuilding efforts after Superstorm Sandy.

Hurricane Sandy wreaked havoc at Gillian’s Wonderland Pier in Ocean City. On the enclosed front portion of the park, the October 29 storm removed the coating on the park’s roof, blew in four large garage doors and damaged three others. The wind took the tops off the Musik Express, Gravitron and chair swings, and flooded the park’s maintenance shop.

Gillian’s is now in its fifth season operating Funland, 12 miles away from Ocean City in Sea Isle City. This smaller, sister park took on 4ft of water, damaging all 13 rides. Most are now repaired and two new rides have been added for the summer, a replacement Wisdom Gravitron and Grizzly, a Super Miami by Technical Park.

Scott Simpson, owner of Playland’s Castaway Cove in Ocean City, has added seven new rides for the 2013 season. “It’s been six years since we had a major park upgrade,” he acknowledges. “It was time.”

An Air Race by Zamperla forms the centrepiece of the upgrade. The 76ft-diameter (23m) park model ride stands 40ft (12m) tall and is equipped with six 4-seater planes that make barrel rolls on a steel arm that lift and fall as they spin a circle. Elevated above the ground, Air Race sits on top of a building home to the Spin Zone Bumper Cars from Amusement Products.

Another major piece, Tropical Storm from Technical Park is the first ride of its kind to appear in a US park. Other new additions include a Gold Rush Kiddie Coaster from Miler, SBF Dune Buggies and a Kite Flyer and Happy Swing, both from Zamperla.

Simpson reports that Hurricane Sandy brought in two feet of water to the lower par of his park. The entire park had to be power washed, but luckily there was no ride damage since electrical components had been removed before the storm.

Both Keansburg Amusement Park and the adjacent Runaway Rapids Waterpark were flooded and wind-whipped by Hurricane Sandy, with the park’s bumper cars strewn along the highway.

But brothers Hank and William Gehlhaus immediately began to rebuild. The waterpark is now completely up and running and the amusement park is partially restored. New Bertazzon bumper cars have been purchased, a Pinfari rollercoaster is on its way, the arcade is operating and kiddie rides are spinning.

The classic Spooky House is being rebuilt for 2014 and the park is constructing a new haunted house walk-through for next year, progress on which can be seen below. Good job folks!

But that’s just the beginning. According to Steel Pier president Tony Catanoso, in 2014 they will add a 200ft-tall (61m) observation wheel on a newly constructed deck just south of the pier, over the beach. When completed, it will be the largest wheel in the US, at least until the 550ft (168m) High Roller is completed in Las Vegas. The Steel Pier expects to operate the attraction year-round. Manufactured by Technical Park, the ride’s 42 enclosed gondolas will be climate-controlled with cushioned seats, music and wifi access. 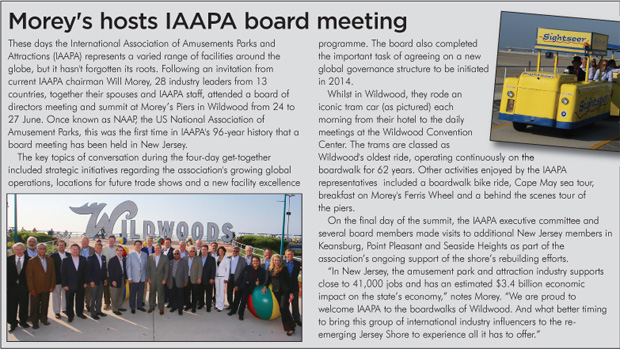