The next big thing in water play? Musical instruments!

From SCS Interactive comes the HydroPhone, shown above being played by Ryan Janzen during IAAPA Attractions Expo. This unique instrument makes music out of water and is a magnet for children. It is offered as standalone attraction or part of SCS’s HydroDek play structures.

The HydroPhone is easy for anyone to play, simply by putting their fingers over the flute-like holes. The standard model comes in either stainless steel or fibreglass and is about 5ft (1.7m) long). Custom models are also available.

WhiteWater West recently unveiled a new product called AquaTune, demonstrated below by John Demchu and Julie Zakus. This interactive water feature available as a free-standing unit or as part of the company’s play structures.

This quirky musical instrument allows users to create their own tunes by covering the water coming out of the holes with their fingers, in turn producing musical notes. The sounds can be adjusted to mimic a range of instruments such as flute, violin and oboe. The basic model has 12 notes set up to represent the musical scale. 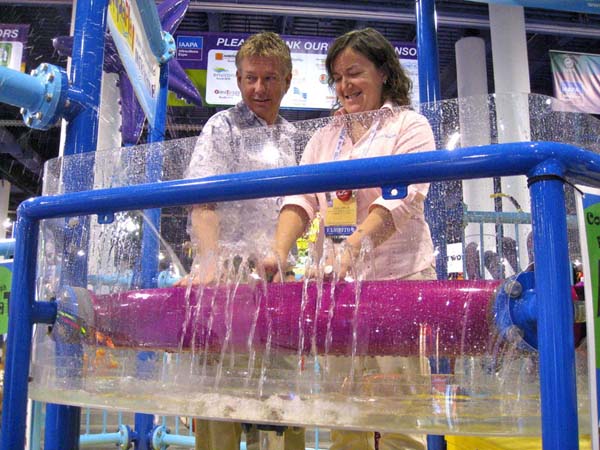