On May 23, 2019
Walt Disney World Resort unveils 64 stunning Disney Skyliner gondolas, including several with graphics based on Disney films, attractions and characters, May 9, 2019, at Disney’s Hollywood Studios in Lake Buena Vista, Fla. The reveal is a milestone for Disney Skyliner in preparation for it’s opening this fall when guests will be whisked between Epcot, Disney’s Hollywood Studios and four Disney resort hotels. (Kent Phillips, photographer) 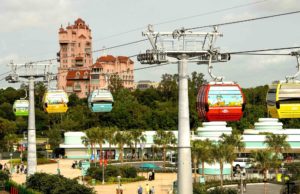 Walt Disney World Resort, Lake Buena Vista, Florida, has unveiled 55 Disney Skyliner gondolas, including several with graphics based on Disney films, attractions, and characters at Disney’s Hollywood Studios. The reveal is a milestone for Disney Skyliner, a Doppelmayr gondola system, in preparation for it’s opening this fall. It’s a system of aerial gondolas similar to the old Magic Kingdom Skyway that once connected Fantasyland and Tomorrowland. Skyliner will have a hub at the Caribbean Beach Resort and whisk guests between Epcot, Disney’s Hollywood Studios and three other Disney resort hotels.

The deadline is approaching….

Tune in on Tuesday