Exactly two years after the opening ceremony of the Beijing Olympics, the city’s National Aquatics Center has reopened as home to the Watercube Waterpark.

Designed by Forrec, the Beijing Watercube Waterpark occupies 12,000 square metres of the former Olympic swimming venue, presenting a selection of word class rides and attractions in very effectively themed surroundings. According to Forrec vice-president Anthony Van Dam the project, “raises the bar for waterparks in China.”

Thanks to its unique credentials, the Watercube transformation has attracted media coverage across the world. This in turn has contributed to long queues of guests eager to enter ever since the waterpark opened on August 8.

“Visitor numbers have been extraordinary and a real test for all staff,” reveals Alan Mahony, the Australian waterpark expert hired to get the facility up and running. “We have reached capacity within two to three hours of opening everyday. We then stop ticket sales and re-open an hour later as we begin to see a turnover in visitors.”

A waterpark had been earmarked for the venue, which sits in the shadow of the “Bird’s Nest” Olympic Stadium, from the very beginning. The finished product makes the most of the building’s translucent bubble membrane structure and really comes alive as darkness falls outside. Swimmers are treated to an “underwater” sensation complete with theatrical lighting and custom props including giant jellyfish suspended from the roof. A suspended stage and giant LCD screen provide additional entertainment in the wave pool.

“It is important to utilise Olympic facilities after the completion of the games,” notes Mahony. “The Watercube is such an amazing architectural structure that it was always going to be a must see attraction, so the addition of the waterpark inside now offers a new form of entertainment for visitors. What makes it so special is the underwater theme, ride selection, innovative park operations and advanced levels of lifeguard training.”

More pictures in the September 2010 issue of Park World (coming soon). Read more about the design of the waterpark here. 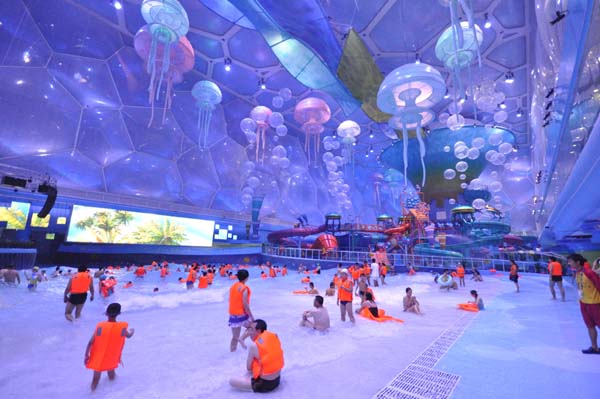