Branded indoor theme park Warner Bros. World Abu Dhabi, which will make its debut in summer 2018 on Yas Island, has revealed details for two of its six themed lands: Metropolis and Cartoon Junction. These will showcase signature rides, entertainment and restaurants inspired by the stories and characters from DC and Warner Bros. Animation. 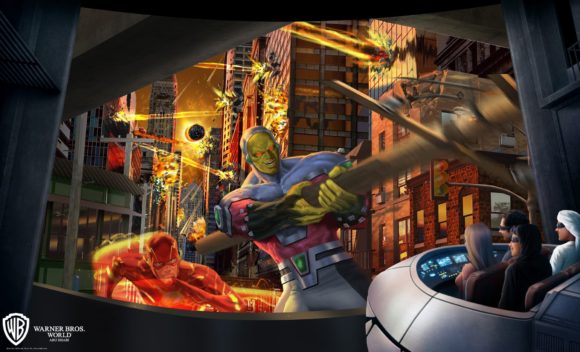 Beyond the arches of Warner Bros. Plaza, guests will be transported to the bright, bustling and modern cityscape of Metropolis. Known as ‘The City of Tomorrow,’ the Manhattan-like skyscraper city is home to Superman 360: Battle for Metropolis, a pulse-pounding attraction that features the Man of Steel in a battle of good versus evil that will decide the fate of Metropolis. Thrill enthusiasts entering the legendary Hall of Justice, the massive headquarters of the Justice League, can hop onboard Justice League: Warworld Attacks – a dark ride with immersive media and special effects, which will dart, swoop, and spin amid a colossal clash while fighting off invaders from another galaxy.

Other exciting attractions featured within Metropolis include Green Lantern: Galactic Odyssey, an awe-inspiring 4D “flying theatre” experience that transports guests across the cosmos to extraordinary worlds enriched with multi-sensory special effects, and Teen Titans Training Academy, a multi-level play area featuring a zipline and other physical activities that invites up-and-coming heroes to showcase their skills alongside the legendary Teen Titans.

“With the park well on track to open its doors to the public within mere months, we are incredibly excited to share our story with audiences around the world, and will be announcing the exact opening date very soon,” said Mark Gsellman, park general manager.

In Cartoon Junction, guests will discover the ‘wit and whimsy’ of the most iconic characters and animated stories from Looney Tunes and Hanna-Barbera.

Featuring nine family-friendly rides and attractions, this land offers the Tom and Jerry Swiss Cheese Spin, a ride where guests can experience a dizzying spinning coaster that careens them throughout the dynamic duo’s house on a fast-moving chase full of twists and turns (and cheese). On the outskirts of town, a classic haunted dark ride gets a trackless twist in Scooby-Doo The Museum of Mysteries. Guests will hop in their own Mystery Machine to follow Scooby and the gang as they try to untangle the silly, spooky secrets of the museum, culminating in a crazy chase that’s reminiscent of the classic cartoons.

Other attractions featured within Cartoon Junction include Ani-Mayhem, an interactive dark ride that takes passengers on a rollicking mission to deliver their own cartoon chaos and Cartoon Junction Carousel. Cartoon Junction is also home to ACME Factory which features three kid-friendly rides of its own, including Daffy’s Jet-Propelled Pogo Stick, featuring a vertical ‘jump’ tower; Tweety Wild Wockets, a fun ride that spins its passengers “awound and awound” as they try to avoid that “bad ol’ puddy tat,” Sylvester; and Ricochet Racin’ with Taz, a car ride that whips racers around a track.