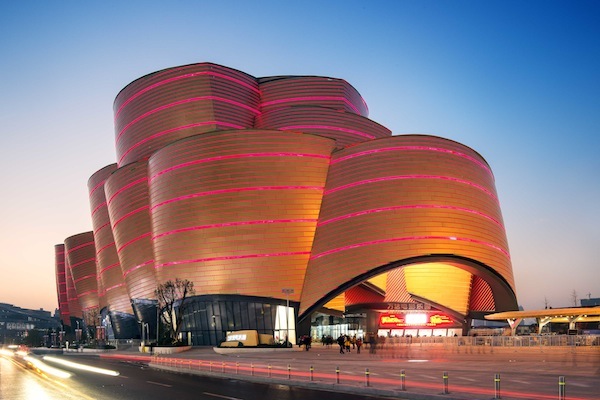 Believe it or not, the bold looking building above in Wuhan, China, houses a theme park. Designed by Stufish Entertainment Architects, it is home what is believed to be the world’s first indoor movie park.

Stufish’s building design aims to showcase Wuhan’s rich local heritage. Nicknamed ‘The Golden Bells,’ it draws inspiration from a 2,000- year-old local Han Dynasty relic called the Bianzhong bells. There are 24 bells in total, and each undulating shape is covered in bespoke geometric aluminium sections finished with fluorocarbon paint that allows the cladding to self- clean as it rains. Strips of LEDs fill the 100mm gaps between the horizontal rows of panelling and make Wanda Movie Park glow vibrantly at night. 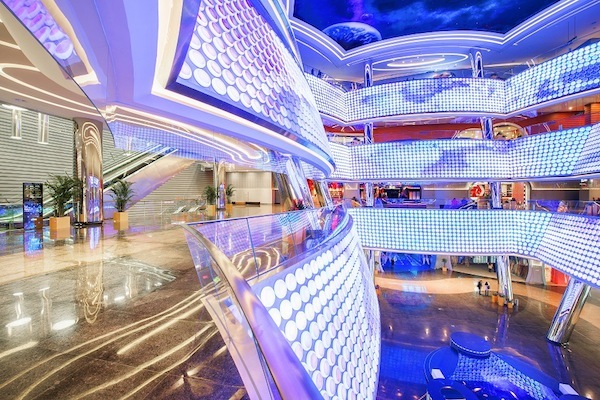 Inside, choreographed theatrical lighting is provided by animated LED discs spanning three floors – as pictured above – and there are also jutting escalators and bold signage. The building’s only entrance, which is positioned in a hollow bell, is just beyond a large column-free canopy. Landscaping was also carefully considered, as the terraced planting, outdoor seating, and water features reference the agricultural practices of the local Hubei province. Stufish’s design is undeniably extravagant, but according to the UK-based company it matches the “intense ride content” available inside, including work by companies including Industrial Light & Magic and Pixomondo, who worked respectively on Star Wars and Game of Thrones. 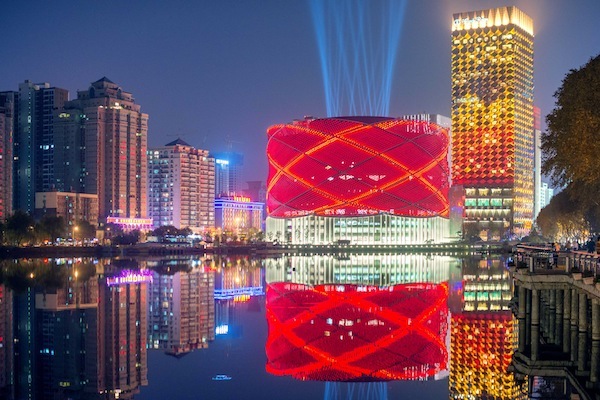 To the west of the Wuhan Cultural District, Stufish other recently completed another anchor building (pictured above), The Han Show Theatre, overlooking Donghu Lake. The 2,000-seat, live entertainment space houses the theatrical, acrobatic water spectacle The Han Show from renowned theatre director Franco Dragone. The theatre’s design is based on the traditional Chinese paper lantern – hence its nickname ‘The Red Lantern’. More on this building, if you’re interested, here.

The entire design, inside and out, was informed by a number of special features inside the theatre, which changes configuration during the show. Though the audience begins its viewing experience in the traditional proscenium set-up, eventually the lower 1,000 seats swing to the left and right, and the top 1,000 seats slide down to the main level. This reveals a 10-metre deep performance pool, and one of the most fantastic features of The Han Show. Within its basin, a series of wet/dry lifts are covered allow for spectacular in and out of water stunts. Meanwhile the world’s largest moveable LED screens (225 sq m), designed by Stufish and linked to robotic arms, add further visual stimulation.

Headquartered in London, Stufish’s portfolio includes work on live shows for The Rolling Stones, U2, Pink Floyd, Madonna, Lady Gaga, One Direction and Cirque du Soleil, plus four Superbowl halftime shows and the opening and closing ceremonies of the 2008 Beijing Olympics. Later this year, the entertainment architects will open another purpose-built theatre in Xishuangbanna, China.