Wallace & Gromit at the Pleasure Beach

Blackpool Pleasure Beach, England, has revealed more details of the new Wallace and Gromit dark ride it will open in 2013.

The £5.25 million attraction, which replaces the Gold Mine that closed at the end of the 2011 season, will feature the uniquely British “claymation” stars of the Wallace and Gromit films. Passengers will be taken on a tour of some of the duo’s (a frustrated inventor and his dog) best-loved adventures including A Grand Day Out, The Wrong Trousers, A Close Shave and A Matter of Loaf and Death.

The animation studio Aardman is working with the Pleasure Beach’s design and engineering team to help realise the ride, full name Wallace & Gromit’s Thrill-O-Matic. Wallace & Gromit creator Nick Park grew up just half an hour from Blackpool in the town of Preston.

The experience will last al most four minutes and culminate and also feature a shop. Although the Pleasure Beach opened a branded area last spring dedicated to television characters from Nickelodeon, the addition of Wallace & Gromit is a theme park world first.

“Thrill-O-Matic represents a significant investment in the park,” notes Pleasure Beach managing director Amanda Thomson. “We know the characters will be a huge hit with the families who come and visit Pleasure Beach.” 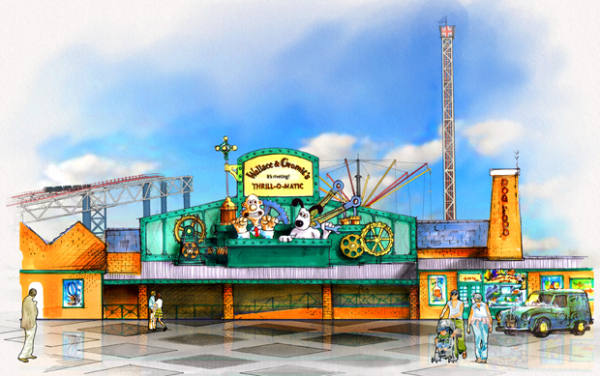