Gary Kyriazi revisits the Pennsylvania amusement park after more than 30 years and finds that, whilst some of the rides may have changed, the atmosphere is alive and well.

The last time I visited the now 114-year-old Waldameer Park in Erie, Pennsylvania, was on a beautiful evening in the summer of 1974. I was taking my first nationwide amusement park trip across the United States, and Waldameer was a much-needed break from the rather hectic visits to the new crop of theme parks that had been proliferating across the US since the late 1960s.

Six Flags had three parks by that time, whereas the other theme parks (besides Disney, Universal and Busch) were all still singular. The Taft Corporation wouldn’t open Kings Dominion until 1975, while the Marriott Corporation wouldn’t open its two Great America parks until 1976, the same year Valleyfair would debut. There was still a large number of traditional parks hanging on – over twice what we have left today – and the tallest rollercoasters barely hit 100ft, yet they were causing a sensation.

When I walked down the tree-lined midway of Waldameer Park, I could sense and smell Lake Erie below the cliff, I heard the gentle tinkling of the 1905 carousel, I saw a happy, relaxed, yet stimulated crowd and I said to myself – even as a 24-year-old thrill-seeker – now this is the American amusement park at its best. Waldameer’s modest, 40ft high, 1951 Herb Schmeck rollercoaster satisfied my wooden coaster lust, and I was ready to move to Erie, Pennsylvania, and adopt Waldameer as “my park.”

Thirty-four years later I revisited Waldameer Park. Its long-awaited Ravine Flyer II had debuted in 2008 as one of the smoothest and most exciting of the mega wood coasters in the world. To say that the park had changed since my initial visit is a major understatement. Certainly, the park is still nestled within its tall trees; flowerbeds and shrubbery abound. The 70-year-old 20,000-sq ft Rainbow Gardens Ballroom is lovingly intact, and the picnic groves haven’t diminished, allowing 7,300 guests to bring their own food. Parking is still free, and the gate is still open.

But Waldameer had certainly changed. Around the classic rides like the Paratrooper and Tilt-A-Whirl were several newer teen rides, and the once-genteel midway now resonated with the shouts and screams of excited kids. Amidst all the excitement, and not a little disoriented with the change, I asked Waldameer Park president Steve Gorman, who with majority owner Paul Nelson operates the park, “What is Waldameer Park now?”

“That’s a good question,” the 50-year-old Gorman chuckled. “Our local following still loves us and remains very loyal, we’re still ‘Erie’s park,’ and yet we’ve had to grow, just like everyone else in this industry. We’re making our decisions very carefully, trying to maintain the feel and history of Waldameer Park while not antiquating ourselves. I guess we’re just putting one front in front of the other.”

“Has Waldameer Park stepped up from being a local park to a regional park?” I asked him.

“Well, that would be a stretch,” Gorman winced. “We’re somewhere in between. Certainly the Ravine Flyer II has given us a major push, but that’s more with the coaster lovers than with the general public. And remember, as far as our region goes, we’ve got Kennywood to the south, Darien Lake to the East and Martin’s Fantasy Island to our Northeast. It’s a very competitive market.”

Very true. The states of Pennsylvania, New York and Ohio have historically had the highest number of traditional amusement parks per-capita and per square mile. However, the sad closures of classic parks like Crystal Beach outside Buffalo, New York, Idora Park in Youngstown, Ohio and Geauga Lake near Cleveland, Ohio, have expanded Waldameer’s region considerably. The venerable Conneaut Lake is just 45 miles south of Waldameer, but its near-closure despite valiant attempts at revival have secured crowds towards Waldameer.

“With Geauga Lake’s closing in 2007, we’re marketing ourselves stronger in Cleveland now, which is just two hours west of us. Of course, Cedar Point is a further 50 miles west of Cleveland, and we can’t compete with Cedar Point. But we offer a smaller, more affordable alternative.”

Sitting on a cliff overlooking Lake Erie, and otherwise bounded by a Pennsylvania state highway, Waldameer Park’s current challenge is space. It took no less than 10 years to get permission from Pennsylvania’s department of transportation, environmental protection agency, various smaller local municipalities, and one upset neighbor, to extend the track for the Ravine Flyer II wooden coaster from the park over the state road to Waldameer’s overflow parking lot. 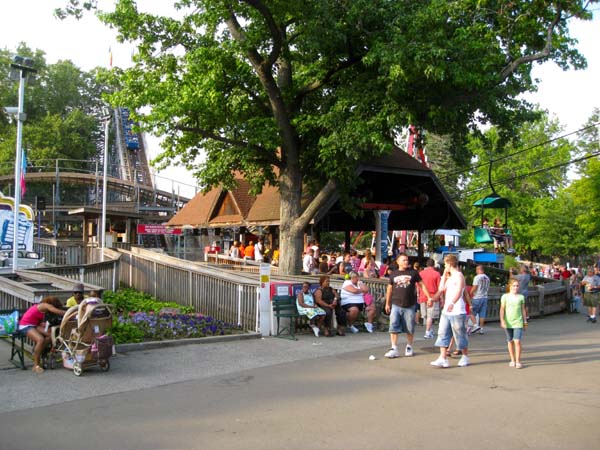 “The main concern wasn’t about the logistics of a rollercoaster structure straddling a state road,” Gorman explains, “but that a rollercoaster flying back and forth over the highway might distract drivers.” To solve that problem, Waldameer hid the coaster tracks from the road with a covered bridge, which just added to the ride’s thrill.

Otherwise, expanding within the park itself continues to be a challenge. “We’re squeezing in new rides when we can, while trying not to overcrowd the midway. We don’t dare give up any of our picnic space, as that’s our bread and butter. And we can’t lose any more of our parking.”

Given that the parking is still free, and the gate is still open, I asked if they’ve thought about charging for parking and gate admission.

“Sure, we’ve thought about it,” Gorman mused, “but we’d rather not. There could be a backlash. Then again, I know other parks that began doing that, and there didn’t seem to be too much of a problem with the public, at least not with the gate admission. We could have a senior admission for people who don’t ride the rides. But again, we’re trying to hold onto our local park tradition, while meeting the future at the same time. It’s a very delicate balance. Still,” he smiled, “we’ve got an ace card up our sleeve.”

He led me to the northern boundary of the park, at the edge of the cliff, behind the Rainbow Gardens Ballroom, and pointed 70ft down to Lake Erie below. “We own about 600ft of beach front down there. A hundred years ago there was access to that beach, using the Toonerville Trolley to get bathers from the park down to the beach and back, but the beach hasn’t been used since that time. It’s still there for us.”

What about a major steel coaster that loads in the park and then dives down to the water below? Like their neighbor Kennywood’s steel coaster, Phantom’s Revenge?

For the 21st century Waldameer is the park to watch. We can all learn from them.

Gary Kyriazi is the author of The Great American Amusement Parks, A Pictorial History, and has been a researcher and writer for the amusement industry for 38 years. 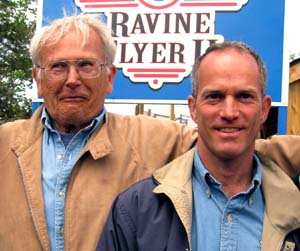