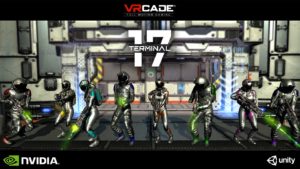 The VRcade Arena is an arena-scale, multiplayer, free-roaming virtual reality system based on VRstudios’ Attraction Management Platform (AMP). It has been developed specifically for commercial applications as a turnkey solution that can be deployed without requiring a custom facility. According to VRstudios, this is the first time an arena-sized VR attraction has been demonstrated on the show floor of an IAAPA Expo.

VRstudios exhibited a 20 foot by 60 foot custom configuration of its standard 40’x60’ system and demonstrating various capabilities of the VRcade Arena, AMP and advanced content. Attendees experienced portions of the recently announced, Terminal 17 attraction – an intense, multiplayer adventure game in which squads of up to 8 players journey through a massive virtual world by physically walking around the VRcade Arena and using a variety of virtual transportation methods. Players communicate with each other to cooperatively solve puzzles, defend the facility, and advance through multiple levels of Terminal 17.

Launch of Museum of the Bible