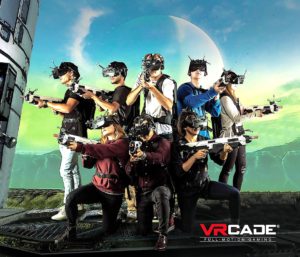 At IAAPA Attractions Expo, VRstudios showcased new commercial VR attractions that are purpose-built for Location-Based Entertainment operators and powered by its comprehensive enterprise Attraction Management Platform (AMP). Shown was the newest model of its VRcade Arena Systems line – the VRcade Arena League. It has a footprint of 30 by 30 feet (9 by 9 m), supports up to 6 players, and incorporates the latest technology from key partners including Hewlett-Packard and HTC.

A new 4-player edition of VRcade PowerPlay, the company’s breakthrough competitive athletic VR eSport, will be running on the VRcade Arena League. This mid-size version is built on the key game mechanics of the original full size 8-player VRcade Arena Pro, and also adds a number of unique new features that pushes the player action and creates a big virtual playing field experience in a very efficient space.

The recently announced 2-player PowerPlay: Atom Edition will also be running on the company’s next generation VRcade Atom II system. Once again, the same game mechanics, fast-paced match play and expansive feel of the original is packed into a compact physical space and utilises special new features as well as the networking technology of AMP. Operators will be able to network up to 8 Atom systems with 16 wireless simultaneous players competing live in the same virtual competition.

VRcade Barking Irons Gunslinger is the latest fun and competitive addition to the company’s portfolio of family-friendly VRcade attractions. Players step into a Wild West town and face off against their friend in the ultimate VR showdown. Players will compete in two different game modes to see who has the fastest hands in the West. These modes include “High Noon-style” quick draw duel rounds and a fast-paced search and destroy engagement where players are teleported to various parts of the town and need to locate and take down their opponent before they are eliminated themselves. It’s easy and fun for all ages to play, and has been designed to encourage players to come back again and again in order to improve their scores or beat their opponent.