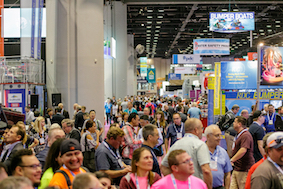 Centennials are always cause for celebration, and the International Association of Amusement Parks and Attractions (IAAPA) did theirs in grand style as they shattered attendance records at the annual IAAPA Attractions Expo 2018. On November 12 to 16 it was held once again at the Orange County Convention Centre in Orlando, Florida. IAAPA set records for the highest attendance and largest trade show floor in the event’s history. A record 42,000 registered attractions industry professionals, an increase of 3,000 from last year, gathered to learn, buy, and network during the association’s 100th anniversary celebration.

Attractions industry professionals from around the world came together to discover the latest products and technologies on the trade show floor, learn from industry experts during the education conference, and build connections with attractions industry colleagues. The largest trade show floor in Expo history featured 1,151 companies, an increase of 37 from last year, who displayed new products and services on 600,375 square feet (55,777 sq m) of trade show floor space, including more than more than 140 exhibitors in the new Exploration Station outdoor structure. That’s 24,140 square feet (2,243 sq m) larger than last year. The five-day Expo pumped an estimated $77.2 million into the Orlando-area economy.

“There is no better way to celebrate IAAPA’s centennial anniversary than with a remarkable and record-breaking Expo,” said Hal McEvoy, IAAPA president and CEO. “IAAPA’s mission is to connect attractions professionals with each other and with new and innovative ideas. All that and much more happened here in Orlando. It’s been an incredible week!”

“It’s been a great show this year,” noted incoming IAAPA Chair David Rosenberg, Monterey Bay Aquarium. “The floor, the education, the record-breaking attendance: it’s representative of the industry and the direction we’re heading in. This week is setting the groundwork for the next hundred years, and to see a show like this, that sets the bar as high as it is, couldn’t be more exciting.”

15,128 people participated in 149 education experiences which included multiple-day institutes and symposia, behind-the-scenes EDUTours at area attractions, panel and roundtable discussions, and constituency lunches. This is an increase of 1,605 participating in 11 more educational opportunities than last year. The education figure includes 713 attractions industry professionals attended the GM and Owners’ Breakfast featuring Bob Chapek, Chairman of Disney Parks, Experiences, and Consumer Products, and approximately 364 industry leaders who enjoyed a lunch-and-learn presentation by Mohamed Al Zaabi, Developer of Yas Island and CEO of Miral in Abu Dhabi, United Arab Emirates. More than 1,800 people attended the Kickoff Event, the Expo’s official opening session, for an update on the state of the industry; to see the new attractions introduced around the world in 2018, and to preview IAAPA’s new global brand. 1,152 participants met, socialised, and shared ideas at the Opening Reception. More than 3,600 people attended IAAPA Celebrates: IAAPA’s Centennial Celebration at Universal Studios Florida.

“I never see enough while I am here,” admitted Will Morey of Morey’s Piers, “I had some great conversations that will move some projects forward in the future.”

“Several pieces of virtual reality caught my eye,” acknowledged Dan Aylward of the Crayola Experience, “and the show has provided a good chance to meet with some of our suppliers.”

“Traffic has been steady,” observed Richard Chance of Chance Rides. “We had a lot of productive meetings with prospective customers on new projects both domestic and international. The economy and the market for amusement rides is very high. We have the best backlog we’ve had in ten years.”

“The show has been really great,” offered Sophie Bolliger of Bolliger & Mabillard. “We had many interesting meetings. This has been a great opportunity to meet existing customers and meet potential new customers.”

“IAAPA 2018 ranks as JRA’s busiest show ever,” said CEO Dan Schultz. “While the real proof of success of any show is the number of contracts you get months from now, the quality and number of potential project leads we discussed last week makes us very optimistic for 2019 and beyond.”

“Overall we had a great show, ” said Stefan Rothaug of Brogent Technologies, adding “the highlight was definitely the press event with Merlin, where we showed a Lego model of the new THE LEGO MOVIE WORLD themed area that will open in spring 2019.”

“We sold an Air Boat to SeaWorld San Antonio. It’s been a fantastic start, seeing our first client before the opening of the show,” reported Mirko Schulze of Huss Park Attractions. “Prior to the show opening we were already very happy. Since then we had several interesting discussions. It seems to be a little slower than in years before but we’re happy with the walk-in traffic so far.”

“This has been a very good show,” believed Torsten Schmidt, Maurer Rides. “We had a lot of appointments, seeing people from the U.S., design companies from China, and also from the Middle East.”

“It’s been excellent,” agreed Vekoma’s Charlotte van Etten. “We have had overwhelming meetings and lots of walk-in traffic. We’ve been busy all week.

“The show has been good,” commented Intamin’s Sascha Czibulka. “Comparable to the past few years, our contacts have made us confident for the years to come. It may be a bit slower than last year due to EAS and other shows. Judging from our meetings the industry has not slowed up. There have been less inquiries from China, but other clients the number of inquiries has been the same or improved, Government regulations have slowed development in some areas. We are selective in which orders we accept.”

“The show has been busier than we’ve seen for awhile,” observed Cody Davis of Screaming Eagle. “We’ve seen existing clients who want more of our products and some new clients who have shown interest, which I think is really, really good.”

“This has been a very good show, smiled Len Soled of Rides-4-U, “with good attendance for the three market segments we deal with, the carnival market, parks, and FECs. We had a number of purchases at the show, and the most-ever leads that we’ve ever seen. So it will be busy beavers after the show.”

“It’s been a really good show,” confirmed Adam Sandy of the Ride Entertainment Group. For us at Ride Entertainment its been our 20th Anniversary this year. Paired with that, we have our largest project opening at the American Dream in 2019.”

“We’ve been incredibly busy all four days,” revealed Premier Rides’ Jim Seay. “While the heavy work load in China is very busy, other areas are becoming equally heated with respect to themed entertainment projects that results in an even higher level of demand. Premier has continued to expand the company to meet the demand and has its largest workload ever as it heads into its 25th year.”

At this year’s Kickoff Event, IAAPA also revealed its new logo and brand that will officially debut on January 1, 2019.

In 2019 the IAAPA Attractions Expo will again be held in Orlando from November 18 to 22. Mark your dance card now.

WhiteWater wraps up the best IAAPA yet!