Universal Studios Hollywood celebrates the Year of the Dog 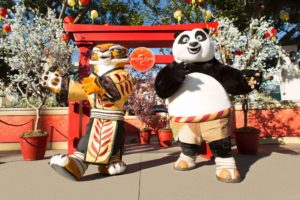 The all-new Lunar New Year event will take place in L.A. from Saturday, February 10 to Sunday, February 25, 2018 in Universal Plaza, a polygon-shaped piazza that sits at the heart of the theme park. Under a curtain of customary red Chinese lanterns and plum blossom Wishing Trees, guests will see the 12 zodiac animal signs accompanied by their symbolic attributes.

The completely reimagined event will also serve up a replica of DreamWorks Kung Fu Panda’s famous Mr. Ping’s Noodle Shop, including Mr. Ping himself who will invite guests to enjoy his authentic Asian fare and a selection of hot and cold Asian beverages.

As a complement to this year’s Lunar New Year celebration, Universal Studios Hollywood will welcome Hello Kitty, the global pop icon created by the renowned Japanese company Sanrio to the entertainment destination. Hello Kitty and her signature red bow will make special appearances to meet guests at the Hello Kitty Shop located within the new Animation Studio Store opening Spring 2018.