You must have been sleeping under a rock (or maybe it was a bit of theming) not to know that Universal Orlando is about take its adventures with Harry Potter to the next level. Here’s what’s in store at Diagon Alley and elsewhere at the Florida resort in 2014.

guests at Islands of Adventure will be able to hop on board a real steam-hauled Hogwarts Express to travel between Hogsmeade and the new Diagon Alley at the adjacent Universal Studios theme park – where they will find a whole new Harry Pottter-themed world waiting for them. Arriving at a replica London’s King’s Cross Station, Potter fans will step off the train to discover a new themed area including a revolutionary new coaster/dark ride/multimedia experience plus all-new shops and dining.

Universal’s creative team has been working closely with Stuart Craig and the production team from the Harry Potter films to make the new area as authentic and spectacular as possible – just as it did with Hogsmeade at Islands of Adventure. This is thought to be the first time a single themed area has been extended on a multi park basis. 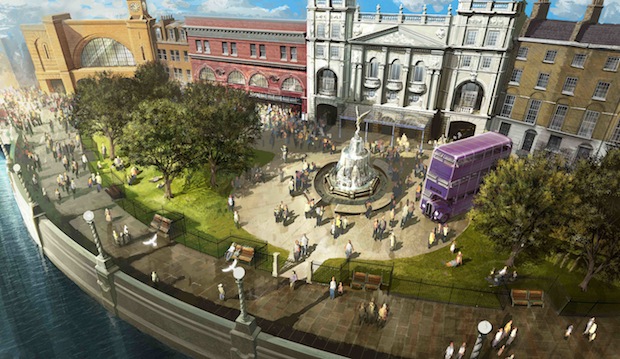 The train journey between the two parks will be filled with views of London and the British countryside – as well as a few surprises. The highlight of Diagon Alley will be the thrill ride Harry Potter and the Escape from Gringotts (pictured below), which will place passengers in the middle of an incredible adventure as they navigate their way through the perils of the Gringotts vaults.

Diagon Alley itself is described as, “a bustling, wizarding hub within a Muggle city.” At Ollivanders, Makers of Fine Wands since 382 BC, guests can buy a magic wand to enhance the Potter experience. Wiseacre’s Wizarding Equipment will offer other “wizarding essentials” such as telescopes, binoculars, armillary spheres, compasses, magnifying glasses and hourglasses, at Weasleys’ Wizard Wheezes novelty items, magical jokes and toys will be on sale, while Borgin and Burkes will offer darker gifts such as mask, skuls and other sinister items. Other idiosyncratic shops will include Madam Malkin’s Robes for All Occasions and Quality Quidditch Supplies. 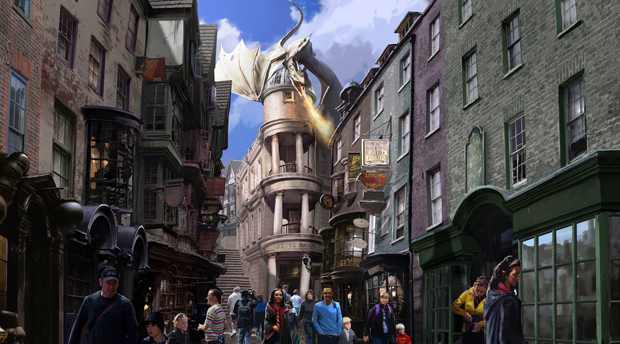 Hungry after all that shopping? Visitors will be able to fill up on traditional British fare including fish and chips, bangers and mash and more at the Leaky Cauldron, or enjoy the frozen treats at Florean Fortescue’s Ice-Cream Parlour.

Universal opened The Wizarding World of Harry Potter at Islands of Adventure in 2010, leading to a massive leap in attendance for the park. Now it can expect an uplift at Universal Studios and, as park-to-park admission will be required for those wanting to experience. 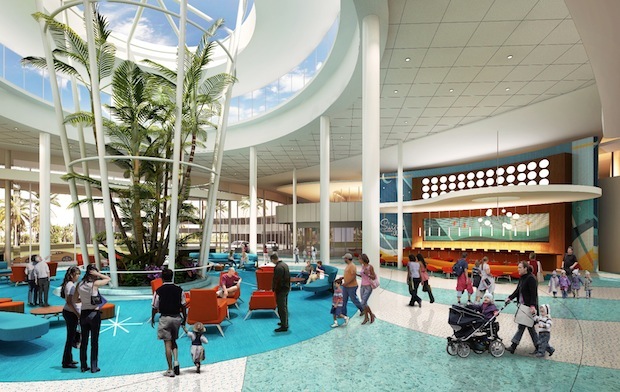 All wizarded out by Harry Potter? Need another day to enjoy the rest of the rides and attractions at Universal Orlando? Then the resort’s new Cabana Bay Beach Resort (pictured above) could be the place for you.

Bookings are now being taken for this new 1,800-room hotel, set to open 31 March. Featuring value-priced guest rooms and moderately priced family suites, the property is the fourth hotel within Universal Orlando Resort grounds and will evoke the classic, retro-feel of iconic beach resorts from the 1950s and ’60s. An area located around the North Courtyard will open first, followed later in 2014 by an area located around, you’ve guessed it, the South Courtyard.

From the moment they arrive, guests will be surrounded by bold design, period colours and neon lighting, evoking a retro feel. When complete, there will be two pool complexes with sand beach and interactive features, a themed lazy river experience and 10-lane bowling alley. 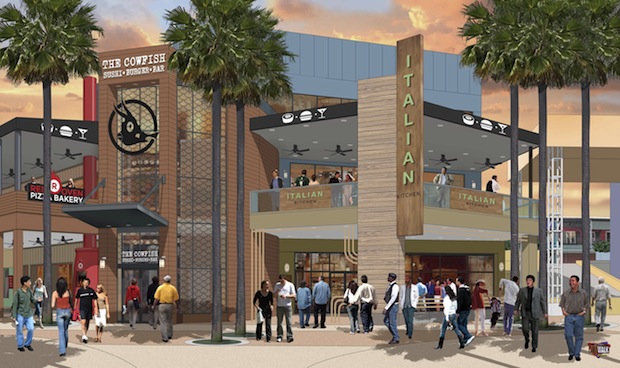 Universal Orlando’s CityWalk entertainment and dining district is to undergo an expansion later this year. Eight new venues will open, offering a mix of established US brands, up-and-coming concepts and some of Universal’s own creations. The different outlets will, however, share several key components including inviting common areas, a mix on idoor and outdoor dining, open kitchens and more.

The new venues include Hot Dog Hall of Fame, created in partnership with Rainforest Café creator Steven Schussler, Antojitos Authentic Mexican Food, Red Oven Pizza Bakery and CowFish (pictured above), whose signature dish is called “Burgushi” – a bureger and suhi. Also featured will be a be a unique tapas-style restaurant plus the Bread Box sandwich shop, Cold Stone Creamery and Menchie’s frozen yoghurt.

Across town at Lake Buena Vista, Walt Disney World’s Downtown Disney is also in the midst of transformation. Yet while CityWalk remains a focal point for revellers after dark, Disney has banished the nightclubs and related outlets in favour of family-friendly alternatives and more shopping.