The Chinese Sturgeon Aquarium (pictured above) is the result of a major renovation of Ocean Park’s freshwater aquarium. The 420,000-litre main tank is designed to simulate the Yangtze River habitat, with strong and adjustable currents, providing a satisfactory living environment for 10 Chinese sturgeons, aged from two to 10, plus other distinctive freshwater fish species.

A favourite element with guests is the underwater travellator seen here. Complementing the animals are eye-opening education panels, models, videos and innovative art installations that convey conservation messages. Ocean Park was assisted in developing the new exhibit by a team from the Beijing Aquarium, which already keeps several Chinese sturgeons.

“The Yangtze River not only holds an important place in the development of Chinese culture, it is also a highly critical ecosystem,” notes Professor Wei of the Yangtze River Fisheries Research Institute, who was at the opening of the new look aquarium last month.

Ocean Park guests can also go “underwater” on the new Ocean Express (pictured below). Since opening at the end of 2009, the funicular transport system, which passes through a hillside to link the park’s Summit and Waterfront areas, has ridden over 3 million guests.Built in Switzerland by Garaventa AG and Gangloff, the ride is complemented by an immersive show from Sarner, the British-based designer of themed experiences.

Once passengers step into the submarine-styled trains, they are transported submerged deep into the “ocean.” Sarner’s technical team made use of sophisticated audiovisual technology, animation and surround sound effects, producing mesmerising visuals that appear on 42 ceiling mounted LCD screens which look like windows into a colourful underwater world.

“The brief from Ocean Park was for us to bring the ride to life,” explains Sarner managing director Ross Magri. “The theme of the ocean works as a juxtaposition to 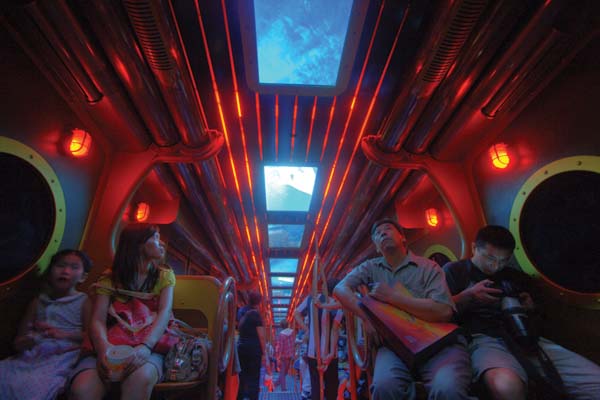