At this year’s International Golden Pony Award Ceremony, Ulet Waterpark received the award for contribution to the development of social and cultural life of Ulyanovsk. The Moscow edition of the event was held in Coliseum Hall during the 20th Anniversary of the International RAAPA Exhibition.

Alexy Rogov, head of the Alexandrovskiy Sad group of companies, and Igor Arinakhin, director of Ulet Aquapark and Polin Waterparks, accepted the award as representatives of the park – which is one of the largest waterparks in the Volga Region.

Polin Waterparks also received the Best Exhibit Award for the fifth year running and were recognised for expertise in the attractions industry. 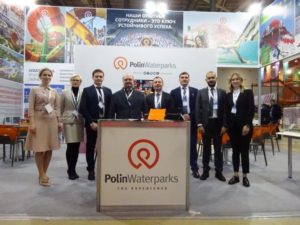 The International Golden Pony Award Ceremony has recognised the excellence of over 300 international leisure operators since 2002, and was held this year on March 1st.