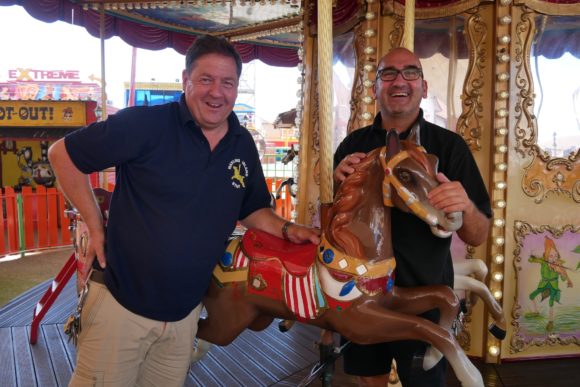 The owners of Funland Hayling Island are continuing on their path to provide affordable family rides at their UK seaside park with two new additions.

When Pleasure Island Family Theme Park Cleethorpes closed in late 2016, Marshall Hill, a director at Funland, enquired as to what rides could be purchased. He came away with a Tilt a Whirl and a junior paratrooper style ride. As is the case with Funland they invested significantly in refurbishing and rejuvenating the rides before opening them to the public.

The Tilt a Whirl with its seashell themed gondolas now features a Neptune statue in the centre, with the control booth themed to look like a pirate ship, and the ride named Neptune’s Fury. The junior paratrooper was completely sand blasted and repainted, but it didn’t last long at the park. The directors felt it looked too small and decided to find something bigger to replace it, and quick.

After contacting Interlink, the team from Funland soon found themselves at Liseberg in Sweden. They came home having purchased the parks Preston and Barbieri Carousel, which within a few short weeks was open in its new home on Hayling Island. Marshall Hill was very impressed with Interlink, describing the process as “the easiest second hand purchase we’ve ever made, we’ll definitely use Interlink to buy rides again in the future.”