Squeezing another coaster into  was never going to be easy. Here Peter Osbeck, rides manager of the Stockholm park, discusses the challenges associated with accommodating its seventh coaster, and its first “woodie” since 1965. 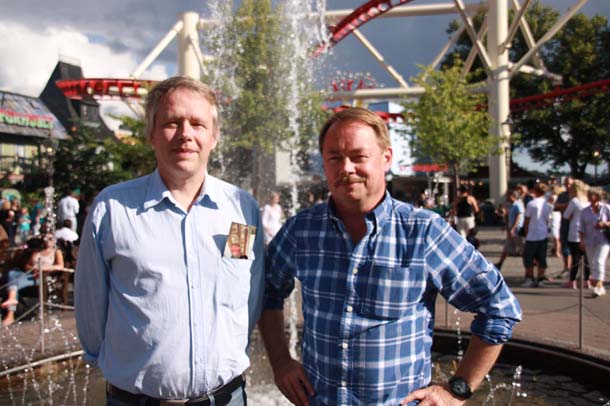 We got a new owner at Gröna Lund in 2006. For a little while I was worried because I have grown up at the park, my father worked here as financial director and (former owners) the Lindgren family were very close to us. However, when I met Johan Tidstrand and his partner, the owners of Parks & Resorts Scandinavia, I was very happy; we got on very well.

I would say we have one of the best locations in the world, but it’s also the worst; very narrow, very compact, and everyone cares what we do because it’s in the heart of the city. Johan and I walked through the park early one morning in July and we ended up down by the water. However, even if we removed the family freefall tower and the bumper car track it would not have been enough. We went up on the roof of Blå Tåget, our ghost train, and I got an idea: we could tear down the building; it was really just a scrap building, and put up a new concrete box with Blå Tåget inside and the rollercoaster on top.

We were gambling a little bit, in fact quite a lot. When you build a coaster on a piece of land and you need one metre more, you just move it one metre. But here you have all these fixed points around it – a building with a Musik Express on top, Blå Tåget, Kvasten with all its columns, the Jetline and Vilda Musen (Wild Mouse) coasters and all their columns, a Zierer Flying Carpet, and of course the boardwalk and the water. This forces us to be creative! 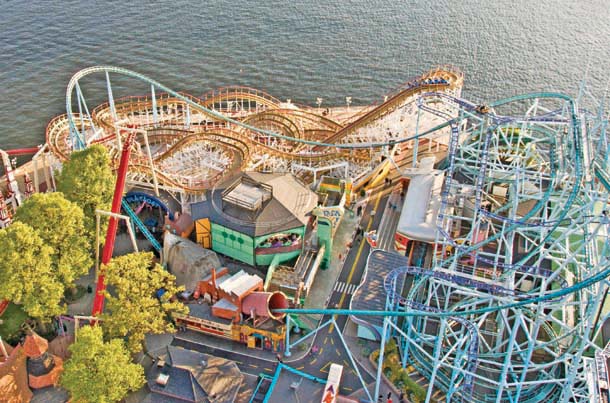 We called The Gravity Group, and (partner) Korey Kiepert came over and talked with us. We felt that someone who could build The Voyage (Holiday Park, Indiana) and all these other coasters was probably the right guy. He said yes, he thought it could be done. Without all the 3D CAD drawings showing the clearance envelope on Kvasten, Jetline Vilda Musen I do not think he would have been able to do it.

They then sent us an animation showing what the coaster would do, back in October 2009, and we were just stunned. We made a calculation, and the board said yes the following January.

We started on August 9 last year when we closed off this area, the first time I am aware of when we shut off an area of the park before the season had finished. The demolition company came and removed the old Blå Tåget, then in October we put in the first piles and concrete.

We had a nice winter this year, earlier and longer than ever in modern history with lots of snow in December. We had a lot of nightmares during installation, I was Skyping Korey night and day, but the guys were very good, they made it. After the first test run in April I said to Korey, “You are not a good engineer, you are a genius!” We were so satisfied; we knew then that we had a winner.

What we decided early on was that it was going to be a Twister. I call it the most twisted Twister in the world because it’s true, no one else had made curves that sharp. Many of the curves have half the radius of a normal wooden coaster and I do not think if we had a longer train it would have been possible to make those corners.

We are using a six-car version of The Gravity Group’s Timberliner trains, the first go into full time operation together with Wooden Warrior at Quassy Amusement Park in the States. They have extremely good “road holding” on the track, like a sports car, but still you have the feeling of a wooden coaster when you are riding. 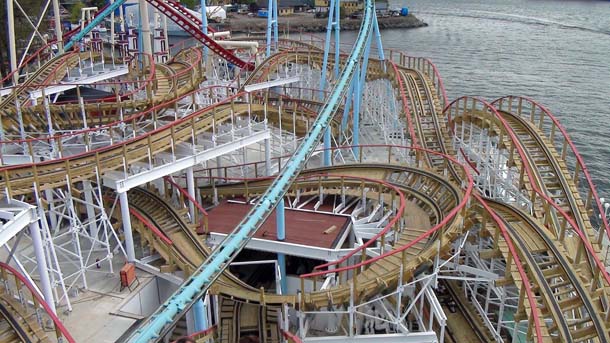 We knew that this was going to be a good coaster, but it could never be the highest, the fastest or anything like that; but it could be something special. The special elements? Curves like you’ve never seen before and great interaction with other coasters, a miracle some would say.

My favourite parts of the ride are the first drop, the airtime and all these curves – you don’t know where you are going. I have ridden it many times, but if you ride it as a guest, it’s confusing; all these columns, the steel and the buildings around you. The ride also has a very small station and a workshop which goes straight into the back of Blå Tåget!

We gave our architect Anna-Karin Ljungh some input to make the area around the ride a bit like the boardwalk parks of the US in the 1940s and ‘50s. The fence and the lamp posts were all designed by her and now we have an inviting area of the park overlooking the water. The entrance to Twister was inspired by a photo Korey showed us of the Racer at Kennywood in the US. We’ve also added three shops along the boardwalk.

We have plans to expand in the future by developing the parking lot, but it’s tricky and I cannot confirm many details. Johan is not afraid to make changes, but he is also very interested in the park’s history. The second bidder for the park in 2006 was Parques Reunidos. I will not say anything bad about them, but I would not have been so happy if our head office had been in Madrid.

With Parks & Resorts I think we have an extremely good owner, and with Twister we have the perfect addition to our fantastic park; it appeals to coaster lovers of all ages, both thrill seekers and families. I am really proud of what we have achieved. 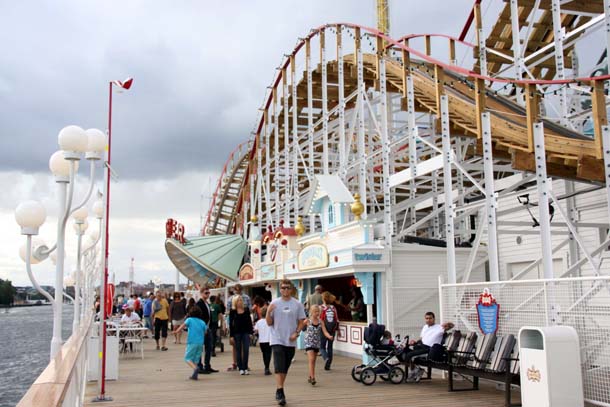 •Interaction with other coasters: Twister crosses its own track 24 times, Jetline 8 times and Kvasten 3 times