In the shape of SpongeBob’s Splash Bash, the Pleasure Beach in Blackpool has a world first. The new ride at Nickelodeon Land is the first Twist & Splash from Mack Rides, adding a new spin to the classic tea cups ride: water.

“It’s quite easy to see how the idea grew,” says Mack spokesman Maximilian Roeser. “We had our existing water canons from our interactive boat ride and wanted to install those on a tea cup ride, together with a basin. Twist ‘n’ Splash offers the fun of both those attractions in one package. As well as large parks like Blackpool it is also suitable for smaller parks and waterparks because of the budget.”

Although the ride looks similar to a set of tea cups with its three spinning discs mounted inside a 20-metre rotating platform – which provide multiple face to face splash encounters with fellow riders – Twist ‘n’ Splash uses a totally different type of drive. Instead of gondolas fixed to the platform, the boats bob up and own on 1.2-metres of water whilst the ride is in motion, to give riders a floating feeling. Wheels underneath each disc provide additional up and down motion when the main platform sinks beneath into water during each ride. 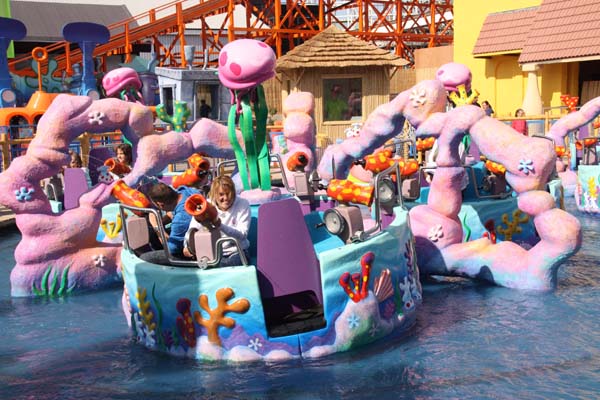 Mack has also tweaked its water cannons for this attraction, making them more compact and easier for children to operate without much strength, plus capable of shooting over a wider range. One person who did not feel their full effect was David Hasselhoff, who was invited to officially open Nickelodeon Land by the Thompson family. During the inaugural ride last month, all water cannons were roped off – rather missing the point of the attraction – in order to protect the Baywatch star from getting wet. And you thought he was supposed to be a lifeguard!

For those parks without a Nickelodeon licence, Mack can offer Twist ‘n’ Splash with a wide range of additional themes, such as pirates or a shipwreck. Theoretical hourly capacity is just over 1,000, using nine six-seater boats with a three-minute ride and load time.

“Twist ‘n’ Splash has a high capacity but is a much smaller investment than a full interactive boat ride on a lake,” highlights Roeser. “The attractions is also operator-friendly as drive and all parts are easily accessible and we don’t have any electric drives in the water.”

A second ride has since been sold to the fast-growing Etnaland in Sicily, for delivery in 2012. 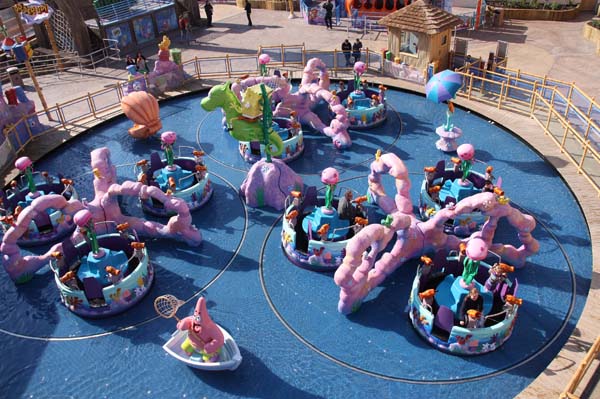 How do you expect the high cost of fuel will impact your attendance this season?