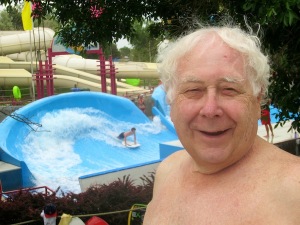 One of the most important things I think I can do while visiting parks is to discover what is new and different, then share this information with you. One innovation I discovered was at Hyland Hills Water World, a waterpark in Federal Heights, Colorado (near Denver).

I first visited Water World in 1994, the year after it added Voyage to the Center of the Earth, a tubing ride in the dark, and four years after it had introduced Lost River of the Pharaohs (pictured below), the world’s first-ever dark tube float. These were like dark rides, but guests in bathing suits floated into the depths of the unknown in family-sized tubes rather than on mechanical ride vehicles.

Both Pharaohs and Voyage have won numerous awards from World Waterpark Association (WWA) and IAAPA. The two attractions have 15 animatronic figures, including a Tyrannosaurus Rex, which stretches 12ft (3.5m) high. Lost River of the Pharaohs is a 1,569ft (478m) family tube river ride through an Egyptian pyramid. Voyage to the Center of the Earth is a 1,600-t long family tube ride that uncovers a world of dinosaurs and prehistoric creatures.

The brainchild of Water World founder Greg Mastriona, they feature theming and storylines by R&R Creative Amusement Designs. Pharoahs is a fairly serene float, like a lazy river, but Voyage is more turbulent, more intimidating. I thought both were wildly successful and would quickly be adopted and imitated at other waterparks. I was wrong.

Instead, waterparks have added bigger and wilder slides, uphill water coasters, larger wave pools and action rivers. But no themed dark tube rides, and most lazy rivers remain rather lacking in terms of theming.

This year, 20 years later, I revisited Water World. Greg Mastriona has retired, but his dark water rides remain and they even named the adjacent golf course after him. I wanted to reconfirm my original thoughts. Were these rides as good as I thought? It turns out that the rides, two of the park’s favourite attractions, have been enhanced in a big way.

Voyage to the Center of the Earth now features a more realistic and menacing T-Rex, which lurches towards those floating by. Also new are some animated prehistoric turtles and Pteranodons, plus some interesting lighting elements. I thought they should have added a prehistoric swine and renamed the attraction “Jurassic Pork”.

Today’s waterparks, more or less, all look the same. Same attractions, minimal theming, or the same tried-and-tested tropical themes. I still think a themed dark tube float is a great idea, and every waterpark in the world is missing out by not introducing at least one dark ride experience. Chances are you’ve already got a lazy river, but don’t be lazy when it comes to theming. A themed dark tube float adds character and uniqueness; it will make your waterpark distinctive. 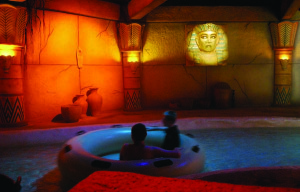