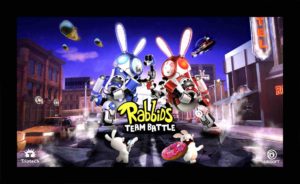 Triotech partnered with Ubisoft, a creator and publisher of interactive entertainment, to develop the first software to be played with the ride. It’s an epic robot showdown orchestrated by Ubisoft’s fun and irreverent Rabbids. The two industry leaders collaborated closely on developing this interactive experience with Ubisoft leveraging its long-standing expertise in game design and 3D animation.

“We’re excited to partner with Ubisoft and bring an all-new experience for the entire family,” explained Ernest Yale, Founder, President & Chief Executive Officer of Triotech. “Up to now, interactive motion simulators have been limited in the number of players due to screen clutter. We feel that with Team Battle, Triotech has broken that barrier and we can offer much higher THRC than previously possible while still delivering an amazing guest experience for park visitors.”

“Triotech’s ambition to come up with a breakthrough attraction is what drew us to the project,” said Jean de Rivières, Vice President of Location Based Entertainment, Ubisoft. “As an entertainment company coming from the video game industry, Ubisoft has a unique approach to Location-Based Entertainment. We want to create innovative ways for audiences to experience our worlds and have fun. If we can accomplish these goals, we believe we will appeal to both fans and newcomers.”

Ubisoft’s Rabbids, which originally appeared in video games, are now a major brand in the entertainment industry, with 16 million games sold worldwide, a theme park ride, multiple VR experiences and four seasons of an animated TV show that garnered 2.4 billion views on free digital platforms as of September 2018.