The Yamaha Coaster is a 50-metre-tall launch coaster that uses magnetic drive technology to sling riders from zero to over 100 kilometres an hour in just over two seconds. The coaster features multiple inversions and a vertical zero G spike that gives the sensation riders will be shot off the end of the track.

Guests board the attraction indoors in a highly themed environment that highlights the accomplishments of Yamaha motorcycle racing. Outside, spotlights bathe the ride structure and a giant “Trans Studio” name sign in light so they can be seen for miles around.

“It is amazing to watch the ride in action especially where the five ton train loaded with riders is lifted vertically to 50 metres with only a powerful magnetic wave touching the train,” notes Premier Rides president Jim Seay. “We are certainly honoured to have had the opportunity to export such an amazing piece of equipment to Trans Studio, the entertainment leader in Indonesia.”

“We wanted to make a strong statement to our guests that we were bringing the best and most innovative attractions to Trans Studio Bandung,” comments Chairul Tanjung, CEO of Trans Studio parent company the Para Group. “With Premier’s Yamaha Racing Coaster we now have one of the fastest and most thrilling coasters in the world.”

The new theme park is the largest indoor facility of its type in the world. Other attractions include a collection of rides by Zamperla including a Midi Discovery, Power Surge, Waver Blaster, two dark rides and a monorail. The Italian manufacturer earlier supplied rides to Trans Studio’s first park in Makassar. 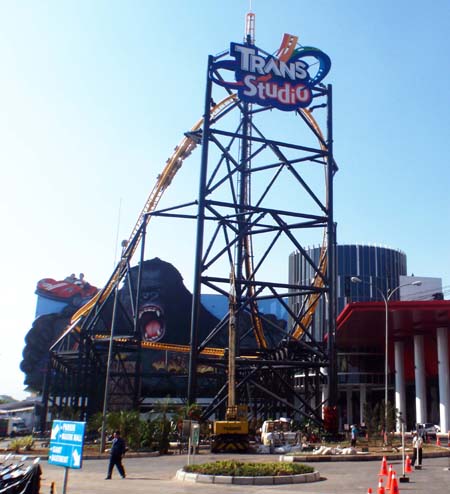