Tivoli started its 172nd season in Copenhagen on 10 April with the relaunch of its classic wooden rollercoaster.

To celebrate the 100th anniversary of the park’s much-loved Rustchebanen (pictured below), its mountain peaks, which were previously the ride’s landmark, have been restored. The highest of the new peaks, Mount Tivoli, rises 26 metres above the famous gardens. In addition, there is a new ice grotto and Denmark’s biggest waterfall, the Alps Fall, with a total drop of over 20m. The coaster’s ‘brakemen’ have been retained, but passengers can look forward to new experiences when the track slips between the peaks and into the mountain where the new ice grotto unfolds. The original peaks were removed back in the 1920s at the request of the Copenhagen authorities as it was not considered appropriate that the first thing visitors to the city saw when they left the main station was a mountain!

Several other Tivoli attractions are celebrating noteworthy anniversaries in 2014, such as The Demon, the park’s floorless B&M coaster now in its 10th season; The Orient, featuring the 63m-tall Golden Tower, is 15 years old; the Grøften (Ditch) restaurant celebrates its 140th anniversary, with a reputation as one of Copenhagen’s most popular dining spots. Meanwhile the Tivoli Boys Guard, “the world’s oldest boy band” who have been a valuable source of music education to Danish children over many years, are celebrating 170 years of drumming in 2014.

New musical entertainment at the park this season includes 24 Friday Rock concerts, with performances from, amongst others, Passenger, Simple Minds and John Mayer, a gospel festival, the Danish music schools festival, and a four-month season of classical performances from the Tivoli Symphony Orchestra and others at the Tivoli Concert Hall. At the end of summer, the park will be launching a new ballet festival. Special events will include Pippi Longstocking Day, Dogs Day, and the annual Halloween and Christmas seasons. 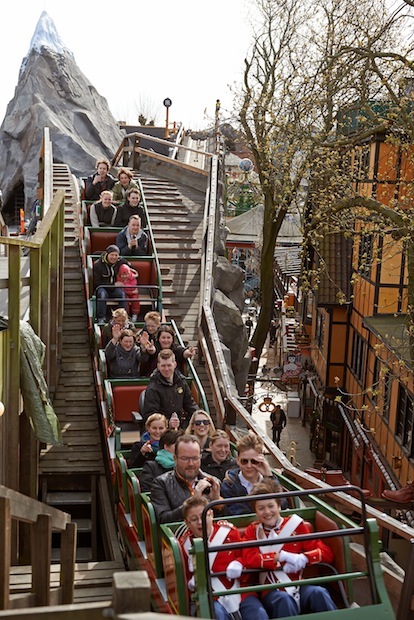