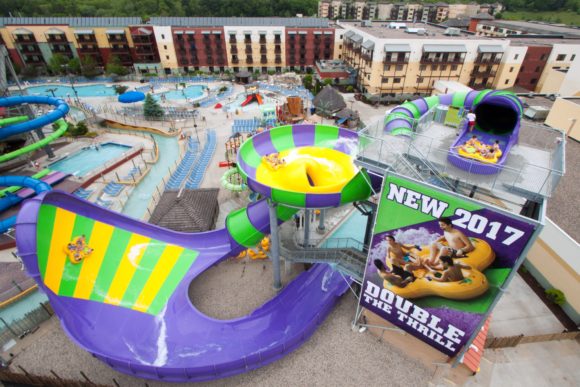 The three largest indoor water parks in the US, which are all Kalahari Resorts, have successfully opened new and exciting expansions featuring Proslide rides. The first of these expansions was at Kalahari Resorts Poconos which officially became the biggest water park in the US in March, 2017. The Poconos “Phase II” expansion includes 8 new ProSlide rides, a wave pool, lazy river, and much more.

The next water park to receive an expansion was Kalahari Resorts Wisconsin Dells, which is the second largest indoor water park in the US. This expansion included the debut of the new ride from Proslide BehemothBOWL 40/TornadoWAVE 60 hybrid ride, with rafts that sweep up and across the curved wall, climbing higher and hanging in zero gravity longer than any other wall on the market.

And finally, the third biggest indoor water park in the US to receive an expansion was at at Kalahari Resorts Sandusky.  The new rides include another ProSlide TornadoWAVE 45, along with a ProSlide FlyingSAUCER 30 that moves at lightning speed, tubes banked high up on the wall, glued by centrifugal force, the steep angle of the saucers creating a ‘drop-and-dive’ sensation as riders race along its edge. Other slides added included a hybrid TORNADO 24/TORNADO 24 combo, ProSlide TWISTER and TurboTWISTER.