Following the spine-chilling success of Castle of Chaos in Branson, Missouri, Alterface is to build a second version of TheHouse, this time in Europe.

This multimedia project is arguably Alterface’s most ambitious project to date, scheduled for a summer 2010 opening at Tusenfryd in Oslo, Norway. A unique fusion of original 3D movie content, 4D effects, a game and live animatronics, the attraction exploits the technical expertise of Alterface, famed for its Desperados interactive theatres, and combines them with the theming skills of Clostermann Design.

“We are confident this will be just the beginning of a long series of new openings as we have gathered tremendous interest in the concept,” says Alterface’s Benoit Cornet. “All potential buyers went to see the attraction live in Branson and it made the sales pitch by itself!”

As in Branson, a rotating 25-seat platform is key to the experience at Tusenfryd. However, this time there will be two screens, bringing the cost down and leaving more scope for animatronics. Also planned are more 4D effects, more interactive targets, a new soundtrack and a new finale, in which the set appears to come tumbling down around the guests.

Alterface hopes to capitalise on the success of the 3D blockbuster Avatar, and offers audiences the added thrill of interactivity with TheHouse: “Avatar is great film,” notes Cornet, “but everything happens behind the screen. James Cameron used a fixed parallel twin camera, whereas we have played with the convergence and space between those two cameras. This means that there are bugs, flies and swords coming off the screen and right at the audience’s head. Better still, you can shoot back at them!”

The film shoot for TheHouse involved professional actors and revolves around Carli Winepeg, who mysteriously disappeared from a castle whilst shooting a horror movie in the 1920s. The high definition 3D images create the illusion of new rooms opening up in front of the players, and creatures coming out to attack. Some actually do.

Perched uneasily on the edge of their tombstone-shaped seats, audience members are subjected to a torrent of effects including leg ticklers, neck ticklers, “butt kickers” and in-theatre lightning flashes, water, wind and low smoke.

Armed with a revolver, audience members take shot at targets on screen and watch insects explode, candle flames flicker, and see the scenery wobble. When the ordeal is over, each player’s score is displayed next to their photograph on screen, a signature feature in many of Alterface’s interactive games.

Right now the Belgian firm is also working on its first Interactive Theater In-A-Box (see page 11), plus the eagerly-awaited Desperados 4D, featuring stereoscopic 3D images, a new brand new storyline and effects galore. Fans of TheHouse may also be interested to hear a number of interactive dark rides are in development with various partners.

To get a real taste of what awaits Tusenfryd guests, watch the YouTube footage here.

All of Alterface’s multimedia content is now offered across a variety of attraction formats, including interactive theatres, dark rides and walk-throughs. A new universal wireless shooting system has been developed for use in each of these outlets.

“It’s a great way to protect your investment,” highlights Benoit Cornet. “Take, for example, one of our first Interactive Theater customers, Fraipertuis City in France. They will switch from Desperados to Pirate’s Plunder this spring, but only the décor inside the attraction will need to be tweaked; everything else remains untouched. Bakken in Denmark did the same, and can now offer both games depending on the time of day. The same approach can be used for TheHouse as new contents will be available in the future.” 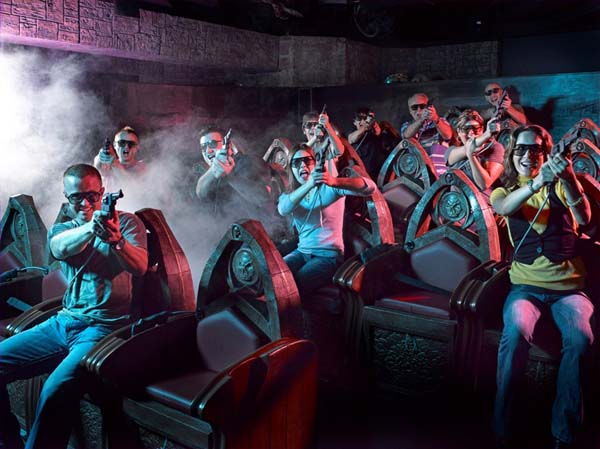