The story of The Smiler

The Smiler, by Gerstlauer, packs 14 inversions into a tight footprint and, at a total project cost of £18 million ($27m/€21m), is the most expensive attraction to date at Alton Towers.

We knew that 2013 was going to be a big investment year for Alton Towers, as it had been quite a few years since we had done a really big thrill coaster – or “Secret Weapon” (SW) as we call them during development. The last Secret Weapon, Thirteen (SW6), was aimed more at the family market, so the time was right for a 1.4-metre height limit white-knuckle experience.

It was then a case of looking at various compelling propositions; some sort of world’s first element to capture the imagination of the general public. We came up with several concepts, and one that we thought we could achieve was the record for the amount of inversions.

When we started the project, the current rollercoaster inversion record stood at 10 with Colossus at Thorpe Park and one in China [Chimelong Paradise] but there were also rumours of a park in the Far East [Jinling Happy World in China] building an 11 loop ride, and we were conscious that we didn’t just want to beat the record, we wanted to smash it, to really give ourselves a bit of a safeguard. I think the initial brief to Gerstlauer was “12 or more” and they came back with 14!”

We approached a number of manufacturers, but Merlin already had a good working relationship with Gerstlauer with after doing SAW: The Ride at Thorpe, and we knew that their EuroFighter product offered a really great, thrilling experience that would lend itself well to the site we had available at Alton Towers.

It’s an incredibly compact site, and we’ve since had a smile about the fact that The Smiler is Alton’s biggest and longest rollercoaster (1.1km), with one of the smallest footprints in the park. That presented a challenge right the start, but Gerstlauer designed a layout that really squeezed the most out of it, and having a lot of inversions certainly helps us get more track into the area.

Alton Towers is notorious for planning issues; as a heritage site we are not allowed to go above the tree line with any of the rides, so we tend to dig down. As the ride got designed and we calculated the forces needed to get the train around the track, we realised that we needed to go deeper. There was a significant amount of excavation on this project, more than I think any of us first envisaged, however it wasn’t too difficult to get planning approved because there had been a ride previously on this site (the Black Hole) and it wasn’t like we were starting from scratch. 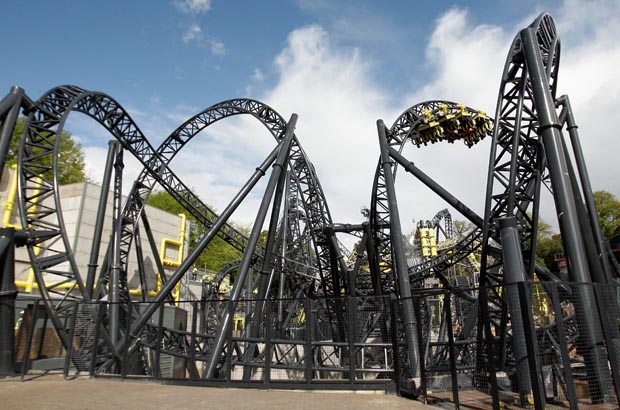 Because The Smiler was going into X Sector, we wanted the colours to match the others rides around it, including Oblivion [B&M Dive Coaster], Submission ]Chance Inverter] and Enterprise [by Huss]. The track looks black but it’s actually a very dark grey, and it gave us a chance to repaint Oblivion at the same time and it bring that back to its former glory. We went to so far as to market research different colour schemes and the yellow came through very strongly. It’s part of the whole twisted theme; The Smiler may look very sweet and sugar-coated on the outside but when you get closer you get the impression there is something a little bit darker and more sinister going on.

One of the first things that happens on the ride is that you drop down from the station into a hidden barrel roll inside a building before entering the first of the two lift hills, which is a standard inclined chain lift. It then all gets very blurry. There’s a series of elements including various corkscrews, inverted drops and I think it’s called the sea serpent roll. I guess the main iconic element is the interlocking over roll and batwing. We tried to break it up with a few airtime hills and bunny hops as well.

The second lift is a vertical lift. We put it in because we knew that on SAW the lift is quite a weird experience, as you climb to the top lying on your back. There was no need to put in any beyond vertical EuroFighter-style drop because you have got Oblivion, the kind of the vertical drop, just across the way in X Sector. The vertical lift gives you a nice breather midway through the attraction, and maybe if we didn’t have it the ride would feel very relentless, but I don’t believe The Smiler is just inversions for the sake of inversions.

It’s always the case that there’s a lot of speculation with Secret Weapon projects, and I am amazed the park managed to keep the number of inversions a secret for so long, until just a few weeks before opening. We were deliberately very cheeky with the planning application. The ride we have built is pretty much the same as submitted in the application, but we removed some of the inversions from the drawings and just put in a wiggly piece of track instead. Fortunately we’ve got a good relationship with the planning department and they are always very helpful and understanding; they always tend to get quite excited about our plans rather than seeing another application for a garage extension!

Especially now with social media, it’s becoming more and more difficult for us to keep stuff a secret and do the big reveal. We have an incredibly passionate enthusiast community, who will go to great lengths to try and get the scoop on what the secret element is, and reading some of their speculation and ideas online was fantastic.

I think, on one level, the reveal of 14 inversions was a big deal and enough to capture people’s attention, but for us the theme and the back story are always integral to the experience. It doesn’t necessarily have to be fully believable, but it anchors the attraction and gives it that additional layer of immersion.

Sometimes in the past the name of the attraction has come along very late, but with this one the name and theme were was developed very early. The basic story of the ride is that The Smiler is a correctional device, which will “marmalise” your mind and turn you into a smiling advocate, with a huge twisted grin on your face. During the ride, guests experience five “manipulation” effects – The Innoculator, The Tickler, The Flasher, The Giggler and The Hypnotiser.

I don’t think we have worked so closely with the Alton Towers marketing department before. It’s been brilliant. We decided early on that we wanted to go back to the days of Oblivion, which was before I joined Merlin but stands out in my mind as one of the most successful marketing campaigns that Alton has ever done. As with Oblivion, we released The Smiler symbol, the logo and then the name of the ride, before the big hit of the world’s first 14 looping coaster.

One of the other great things we things we did was The Smiler Game, an app which has proved incredibly successful. When it first came out I don’t think people realised that the ride experience in the game was the same as the real thing. There is also some augmented reality and scannable elements to enjoy while you are waiting in line, offering a solution to the age-old problem of how to keep people entertained in a queue. We now have free wifi throughout the Alton Towers Resort, so you can download the game while you are at the park and then unlock stuff by going on the ride. For me that’s really exciting because it’s working with social media rather than simply acknowledging it. Smartphones are completely integral now to everyday life, especially in the case of The Smiler’s target audience.

A promotional trailer for The Smiler Game

Those 14 inversions in full

The Smiler uses a similar vertical lift to Gerstlauer’s EuroFighter range of rollercoasters, but features a next generation 16-passenger train (four rows of four) and several elements unique to this ride.

From 1983 to 2006, the site now occupied by The Smiler was home to a coaster-in-the-dark called the Black Hole, model Jet Star 2 by Anton Schwarzkopf. Located in Munsterhaüsen, Bavaria, the former Schwarzkopf factory and several of its employees are now with Gerstlauer Amusement Rides, so there’s a nice bit of symmetry in the arrival of the new coaster at Alton Towers.