The State Fair that never ends!

With the Texas State Fair now in full swing, Gary Kyriazi travels to Dallas to discover how the Texas fairgrounds were reinstated earlier this year as a summer attraction, almost three decades after the closure of State Fair Park.

Don’t miss it, don’t even be late!

It’s dollars to doughnuts that our state fair

Is the best state fair in our state!”

Phil Stong’s 1932 novel State Fair, about an Iowa family’s September adventure, wonderfully captured America’s love of the eagerly awaited annual event that is the state fair. The 1933 film version of the book, starring Will Rogers, was a hit, and the 1945 Rogers and Hammerstein musical version of the book was an even bigger hit. The second musical version of State Fair in 1962 was even bigger and splashier than the 1945 version. Starring Pat Boone, Bobby Darin and Ann-Margret (in her first film), this last version of State Fair changed the locale from Iowa to Texas. As such, it is the Texas State Fair for which the Rogers and Hammerstein song will be forever linked.

The Midway – the amusement section – at the Dallas, Texas, fairgrounds is notably larger than that of any other US state fair, and as such has operated as a separate seasonal amusement park since around 1905, prior to the two to three-week October run of the fair itself. Called simply State Fair Park, its superb 1947 Comet wooden coaster by National Amusement Devices and the 20+ major and kiddie rides (which were augmented during the fair by travelling shows) created strong summertime attendance. Even the 1961 opening of the legendary Six Flags Over Texas, a mere 15 miles away, didn’t deter State Fair Park from continuing as a successful, local, urban amusement park; that is, until its closure in 1984. Twenty-nine years later, in 2013, Errol McKoy, president of the State Fair of Texas, resurrected State Fair Park as “Summer Adventures.”

McKoy, 69, is a living legend in the amusement industry, and with Six Flags in particular. He started as a 17-year-old ride operator at Angus Wynne’s Six Flags Over Texas during its opening year in 1961, working summers while getting his degree in economics from Northeastern State University in Oklahoma. When the 1964 New York World’s Fair contacted Wynne to contribute, Wynne sent McKoy to supervise the rides and games at the event’s Lake Amusement area. After the World’s Fair, Errol, by then 22, became general manager for Six Flags Over Texas for one year, before he was sent to Atlanta to assist in opening Six Flags’ second park, Six Flags Over Georgia.

“I had originally intended to be a stockbroker with Merrill Lynch,” Errol says, “but by that time, the amusement industry was in my blood, and I never left it.” Errol became general manager of Six Flags Over Georgia, moved back to Texas in 1980 to become executive vice-president of Six Flags Inc, and by 1985, “Well, I needed a break!” He took a year off before being offered the job of president and general manager of the Texas State Fair. As a proud Texan, Errol didn’t have to think twice about accepting the position. “It’s where I belong.”

Two years prior to Errol’s arrival at the State Fair, the summertime midway had ceased operation to make way for major construction for the Texas Sesquicentennial Centennial of 1986. The Centennial celebration was a success, and after it was over, “we considered re-opening the summer midway, but finally decided it wasn’t worth it. The summer midway was always an open gate and there was trouble at night; we realised that such an operation just wasn’t going to work any more. But I was always intrigued with the idea of doing something in the summertime. Over the years we looked at a couple of plans for a summer midway, but we didn’t have enough money to operate both the fair and a summer midway. By around 2007, we finally had enough money to proceed with bringing back the summer midway, which we decided to call Summer Adventures in Fair Park.”

The challenges were considerable. “We had 24 acres of concrete to work with, and with the Texas summer heat we needed a way to keep it cool. We covered 16 of the acres with large shade structures, and in the open areas where shade structures weren’t feasible we created water attractions. The other challenge was to transform the older ‘carney’ look into a softer, theme park feel. We used lots of greens and blues, quiet and cool colours. Also we had to create an aura of safety, that Summertime Adventures would be safe and secure, and so we gated it.”

Even so, Summer Adventures 2013 debut (4 May until 18 August) was an encouraging beginning. Of course, Errol’s Alma mater, Six Flags Over Texas, is a mere 15 miles away, but Summer Adventures is making no Davidian attempt to compete with Goliath. “There’s no way we would even consider competing with Six Flags. In fact, our marketing is just zero to 10 miles outside of Dallas. We believe we’re creating a unique offering for families with young children, ages 4-14. The 15-year-olds on up really get into the big rides. Summer Adventures has a very relaxed atmosphere, very park-like, with softer, family-friendly rides and attractions. That’s our unique offering.”

As part of the relaxing environment, Summer Adventures has cabanas available for families for resting and picnicking during the day. “The cabanas actually came out of necessity. We had all of these game tents in the game area of the State Fair that we didn’t want to have to move, so we came up with the idea of using the 21 tents as cabanas for Summer Adventures. It was very little cost to us; it was just out of a design need not to have to move our game tents, so we created something out of that spot. We also thought there may be a market for a high end type of cabana with air conditioning, so we bought four Airstream trailers, and those became very, very popular.”

Another challenge for Summer Adventures is its choice of rides, having the State Fair to consider, and particularly the three travelling shows that bring in an additional 80 rides for the fair. “Summer Adventures and State Fair are two completely different products, and we’re necessarily keeping them separate. Except for three big rides, and our Windstorm roller coaster (Pinfari), all of Summer Adventures’ flat rides will be removed during the run of the fair. We built a 70,000 square foot warehouse to store them during the fair and over the winter.”

The three big rides include one that opened for the Texas Sesquicentennial Celebration, the Texas Star (from the now defunct Italian manufacturer SDC), which at 212ft is currently the tallest Ferris Wheel in North America. In 2008 the 40-gondola Texas Skyway (from Doppelmeyer) opened to transport guests from Big Tex Square, the hub of Fair Park, to the rear of the amusement area. The third big ride was new for Summer Adventures’ opening this year Once again, they considered carefully.

“What we try to do for the fair is create rides that are bigger than life, such as the Texas Star. So we chose carefully for our third ride. Most World’s Fairs have a big Ferris Wheel, a gondola ride, and a big space needle, so I felt that the third ride that would round out the offer was an observation tower. In fact in 1936 we held the World’s Fair, and that’s where our larger-than-life, highly designed buildings came from. We decided on a 500ft air-conditioned Super Gyro tower from Intamin, which we opened this summer as the Top O’ Texas Tower.

While Summer Adventures’ 2013 opening was successful, Errol has identified its challenges. “It was hard to sell the season pass because no one knew yet what the park was. So our biggest challenge now is to do a better job marketing and building awareness of our product, and getting people to ride the light rail to get here. The product itself worked great, so there’ll be no changes there. Overall, we’ve giving it three-years to get the park up and profitable.”

In the meantime, the Texas State Fair continues to be, indeed, “the best state fair in our states.” Errol says, “We promote it all year long, it’s such a huge product and has such a huge market. We have visitation from every county in Texas, all 50 US states, and 16 foreign countries. Geographically and operationally it’s the biggest state fair in the world. We present musicals, college football games, the largest car show in the nation; it’s more of a World’s Fair than it is a state fair.”

Since 1952, the Texas State Fair’s iconic greeter has been a 52ft (16m) tall cowboy named Big Tex. Though damaged by an electrical fire in October 2012, Big Tex is now back greeting visitors, as big and Texan as ever.

Gary Kyriazi is the author of The Great American Amusement Parks, and the writer/producer of America Screams, the first pictorial history and television special about American amusement parks. He has been a researcher and historian on American amusement parks for 40 years. The 2013 Texas State Fair runs from 27 September until 20 October. Summer Adventures reopens on 6 June.

Everything’s bigger in Texas (including the heart attacks)

Since the invention of the Fletcher’s Corny Dog, visitors to the State Fair of Texas have often ranked food – and we’re talking fried food – as one of the top reasons for attending the annual event in Dallas, up there along with the amusement rides and other activities.

In 2005, organisers implemented the Big Tex Choice Awards, sparking a friendly food fight among concessionaires as they compete for the prize of either best taste or most creative food of the fair.

The judging panel has announced the winning foods for 2013. Best taste goes to the Deep Fried Cuban Roll, comprising a filling of slow cooked pork shoulder, chopped ham, Swiss cheese, pickles and a secret sauce spread onto a slice of Swiss cheese, rolled up in pastry dough and, of course, deep fried. The roll is served with a side of Majo sauce for dipping. The winner of the most creative is the Fried Thanksgiving Dinner, featuring Mama’s homemade stuffing and diced roasted turkey rolled into a ball. Next it’s dipped in southern cream corn and rolled in seasoned corn meal, then fried until golden brown, and served with old fashion giblet brown gravy and orange cranberry sauce for dipping. A complete thanksgiving dinner on the go!

We thought Park World readers might be interested to learn of some of the other award-winning, weird and wonderful foods that have been blocking the arteries of State Fair visitors since the Big Tex prize was implemented, so see the list below. Don’tcha feel greasy just reading it? 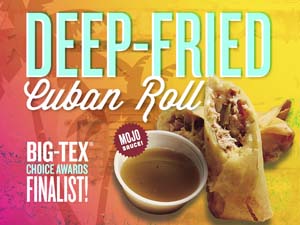