The Simpsons in 4D opens at Broadway at the Beach 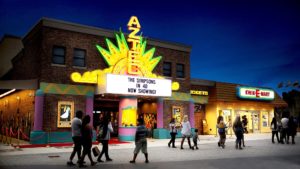 The Simpsons in 4D has opened at Broadway at the Beach, Myrtle Beach, South Carolina. This highly-anticipated attraction features authentic recreations of the show’s famous Kwik-E-Mart and iconic Aztec Theater, bringing a slice of Springfield to South Carolina’s most popular tourist destination.

The Aztec Theater is a family-friendly motion experience in a state-of-the-art 4D theater that showcases a dynamic special effects-filled adventure starring America’s favorite animated family, The Simpsons. Characters from Springfield, U.S.A. are lined up outside of the Aztec Theater as part of the fun exterior design. Inside the Aztec Theater lobby, visitors can join Homer and Marge on the red carpet, celebrate the career of Troy McClure, and enjoy pre-show clips featuring some of Springfield’s finest, including Itchy and Scratchy.

There’s more to explore at the authentic Kwik-E-Mart next door. The fully-themed convenience store has been brought to life with select products, including Buzz Cola, Lard Lad Donuts, and six show-inspired Squishee flavors.

The Simpsons in 4D was created in partnership with SimEx-Iwerks Entertainment, FoxNext Destinations, and Gracie Films. “We are excited to share this immersive, multi-sensory experience featuring the world’s most advanced 4D attraction technology,” said Michael Needham, Founder and CEO, SimEx-Iwerks Entertainment. “The reaction to the opening of the Kwik-E-Mart has been overwhelmingly positive and we see fans from all generations thrilled to be part of The Simpsons story.”

The Simpsons is the longest-running primetime scripted show in television history.

The Simpsons is now in its 30th season and in development on seasons 31 and 32 with more than  600 episodes. It has a tremendous following.

Broadway at the Beach is South Carolina’s number one tourist, shopping, dining, and entertainment destination attracting millions of visitors annually. Broadway is set on 350 acres (142 hectares) in the heart of Myrtle Beach and features world-class shopping, dining and entertainment in a series of magical, interconnected villages, surrounding the 23-acre Lake Broadway. Broadway’s tenant mix includes attractions, restaurants and eateries, specialty shops, and hotels.