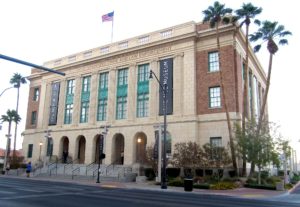 Based in downtown Las Vegas and dedicated to the story of organised crime and law enforcement, The Mob Museum has completed its first major renovation, which includes two floors of brand-new exhibition spaces. The Prohibition-era exhibition, The Underground, is located in the Museum’s basement. Guests to The Underground are surrounded by artifacts and stories from the era while they learn about rum running and bootlegging in the working distillery and enjoy Roaring ’20s cocktails in the speakeasy. On the first floor, Organized Crime Today focuses on the modernisation and evolution of organised crime in the present day. The Use of Force Training Experience and Crime Lab Experience join the Museum’s already robust experiential platform and focus on methods employed by law enforcement to apprehend and prosecute criminals and their organisations.

The Mob Museum opened to the public on February 14, 2012, the 79th anniversary of the St. Valentine’s Day Massacre, one of the most infamous days in Mob history in which seven men from the Bugs Moran gang were murdered by Al Capone’s South Side gang. The date is also significant given that the Museum has on exhibit the brick wall from the Massacre – one of the Mob’s most iconic artifacts.

The museum presents an exciting and authentic view of the Mob’s impact on Las Vegas history and its unique imprint on America and the world. With tales so intriguing they need no embellishment. The Museum reveals an insider’s look at the events and people on both sides of this continuing battle between organized crime and law enforcement. True stories of mob history are brought to life in a bold and contemporary style via engaging exhibits and multi-sensory experiences. The Mob Museum puts the visitor in the middle of the action through high-tech theater presentations, iconic one-of-a-kind artifacts and interactive, themed environments.

Hyperion: the birth of a giant