The Giant – towering soon over a city near you? 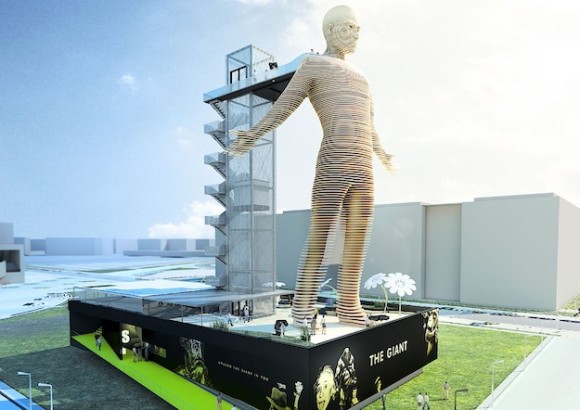 A new and unusual visitor attraction concept, The Giant is the world’s largest moving sculpture.

This 10-storey high androgynous figure features a head, arms and eyes can that rotate in various positions. Atop the sculpture there is a viewing tower where visitors can literally stand on the shoulders of a giant and observe the surrounding environment. 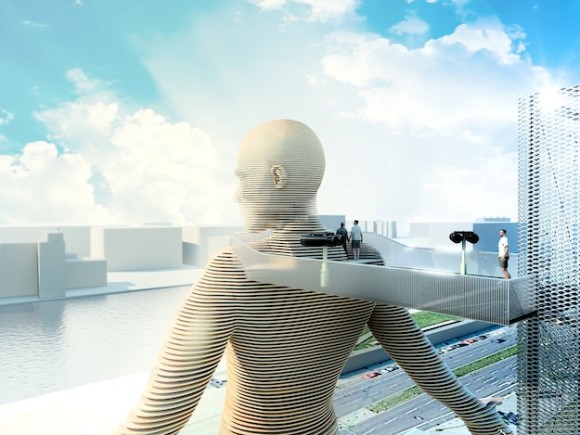 Conceived by The Giant Company from Dublin, the idea is inspired by Gulliver’s Travels, and will stand 34 metres (112ft) when the first version is built in Berlin, planned to open in 2017. Up to 20 more are planned around the world, at a cost of $10 million to $30 million each.

The “creative canvas” will be embedded with tens of thousands of LED pixels, allowing The Giant to transform instantly anytime day or night into a myriad of representational or abstract images. It could, for example, assume the image of famous men and women or offer the world’s largest selfie of visitors, who will be scanned on entry. The Giant can also be used for artistic events, brand celebration, social interaction and to commemorate holidays and other occasions. 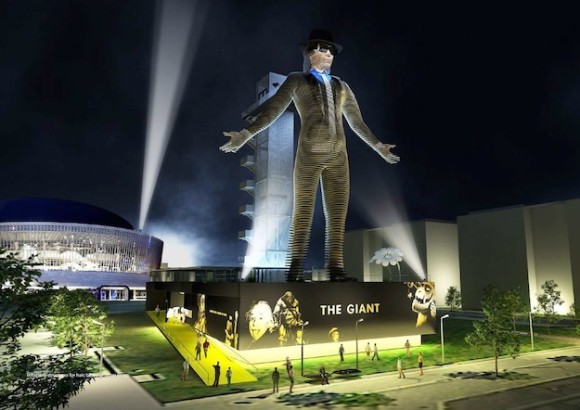 Inside the 10,000 square ft (929 sq m) building that forms the main structure, The Giant Experience will offer an interactive exploration of giants from legend and mythology to a celebration of the great and good of the city and country where it is located. The Fee Fi Foo Fum Snack Shack will provide a range of international street and fast food specialties and Goliath’s, “the world’s smallest department store” featuring products and installations by local inventors, artists and artisans. Promoters say the central theme of The Giant is “to awaken the giant in you.” Additionally The Giant’s Foundation has been established to fund the philanthropic, educational and humanitarian goals of The Giant.

“We are working with city governments around the world,” says Giant Company CEO Paddy Dunning, “and expect to establish 20 Giants over the next decade. Whilst each Giant will offer an original experience, there will be an interconnection between our family of Giants and with the aid of new technologies they can communicate with each other creating real time global events.”

Dan Pearlman, a Berlin-based “experience architecture and strategic branding” firm headed by Irish CEO Kieran Stanley, is working with The Giant Company to design, build and market The Giant.