The Amazing Resurgence of Casino Pier 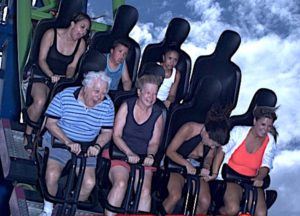 Casino Pier, an amusement pier in Seaside Heights, New Jersey, was partially destroyed on October 29, 2012, when part of the pier collapsed into the Atlantic Ocean due to the storm surge generated by Hurricane Sandy. You may recall photos of the Jet Star roller coaster forlornly sitting in the ocean, a symbol of that destruction. 18 of the 38 rides on the pier that year were lost because of the storm, including the Music Express, Centrifuge, Stillwalk Manor dark ride, and Log Flume. Despite this, park management successfully rebuilt the pier’s lower deck, and re-opened with limited rides in July 2013. It currently contains 25 rides, highlighted by two new major rides. They are Hydrus, a Gerstlauer Euro-Fighter 320 roller coaster, and a 131 feet (40 m) tall Ferris wheel from Technical Park.

Hurricane Sandy hit the Pier 80 years after Linus Gilbert first opened it in 1932, and was owned and operated at the time of the storm by the Storino family. If it had been anyone other than the energetic Vincent Storino operating Sandy Casino Pier and adjacent waterpark when the storm hit, I’m not sure the Pier would have survived.

“From the time Sandy hit until July 2013 when we reopened the pier, that was difficult,” he admitted. “It was a lot of work and constant planning for tomorrow. Once we passed the hurdle of recovery, my partners and I decided to complete the waterpark remodel, add a 36-hole adventure mini-golf, bring new exciting rides to the existing pier and boardwalk, and then undertook the pier expansion project we are just completing, so there has been a lot to do over the past five years.”

But now, finally, Casino Pier is whole again. Replacing Jet Star is Hydrus. One ride on it, pictured here, revealed it to be one of the smoothest Euro-Fighters built. It’s built above the beach rather than out over the water so as to avoid another disaster. It is both thrilling riders and raising spirits in this portion of the Jersey shore, where everything is not yet back to normal.

Storino has fortified the pier since rebuilding. Good engineering has resulted in locating the pilings in better patterns, placing batter piles by the waterline, and strengthening the footprint. He believes the pier will now be able to better withstand future storms. “We are never complete,” he maintains. “There is always something to be done. We will still be adding future rides to the new pier, but for now it marks the end of the Superstorm Sandy era and signals the new Casino Pier.”