Six Flags Over Texas, Arlington, Texas, is celebrating its 50th anniversary with the unveiling of a new-look Texas Giant – a wooden rollercoaster with steel track.

Redesigned and rebuilt at a cost of $10 million, the ride replaces the original Texas Giant wooden coaster built in 1990 that eventually became too uncomfortable to ride.

The Rocky Mountain Construction Group, a specialty contractor, has installed a new type of steel track and support structure of its own design, making this hybrid coaster all new from the ground up. It claims the steepest drop of any wooden coaster in the world at 79 degrees; three bank turns at more than 90 degrees, and a state-of-the-art steel track that zips riders through a white-knuckle minute-and-a-half of twists and turns.

“This is the best ride we’ve ever built …bar none,” contends Six Flags Over Texas park president Steve Martindale. “We’ve taken the best attribute of a wooden coaster – plenty of airtime — and the best of steel smoothness combined with speed, and created a truly remarkable rollercoaster experience. As we like to say in Texas, this ain’t your Daddy’s ride.” 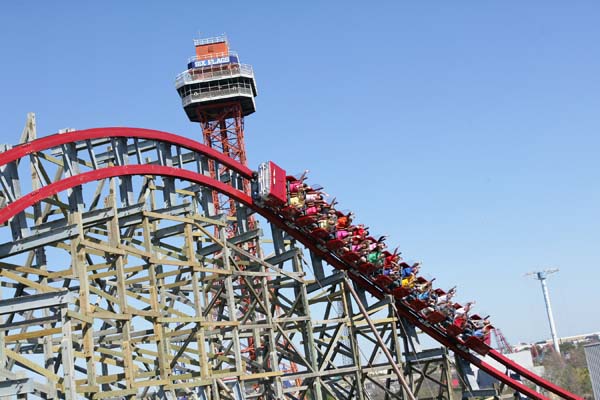 The new Texas Giant features 17ft-longhorns welcoming guests to the ride’s area. Three new trains from Gerstlauer pay homage to the Lone Star State and the popular 1961 Cadillac Deville. Each train has a custom-made “cattle horn” and custom-designed saddle seats. There’s even an oil derrick nestled right in the belly of this wooden beast. 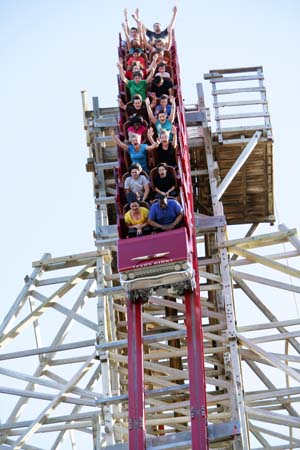