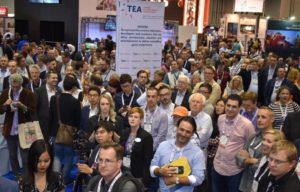 Awards Gala to be held in Anaheim in 2019

The winners represent “some of the finest achievements in the creation of compelling places and experiences,” said TEA International Board President Michael Mercadante of Main Street Design.

Ticket sales for the Gala will commence in December 2018 for the TEA Summit and Thea Awards Gala, April 11-13, 2019 at Disneyland Resort in Anaheim, at www.teaconnect.org.

From hundreds of nominations received each year, the Awards Committee deliberates at length to produce the annual slate of recipients, which is submitted to the TEA International Board of Directors for approval; the committee for the 2018-19 cycle, was headed by Lisa Passamonte-Green of Visual Terrain.

The prestigious TEA Thea Award is considered one of the industry’s greatest honours. Nearly 1,000 entertainment professionals converge on the Los Angeles area every year for the TEA Thea Awards Gala – an elegant, black-tie dinner affair – preceded by the TEA Summit conference, which devotes much of its two days of sessions to exploring the Thea Awards recipients.

IAAPA names officers and new board members for 2019