With a descent of 121° degrees, the Gerstlauer ride steals the title from Timber Drop at Fraispertuis City in France (113°), an S&S El Loco coaster that opened just a few weeks earlier.

Built in the shadows of Mount Fuji, Takabisha represents an ¥3 billion ($36bn/€27m) investment for Fuji-Q HighLand and the seventh rollercoaster for this amusment park in Fujiyoshida, Japan. The new ride is the first Euro-Fighter to be built by Gerstlauer Amusement Rides in Asia and is also the German manufacturer’s tallest, longest and fastest coaster ever, featuring both a launch and lifthill. 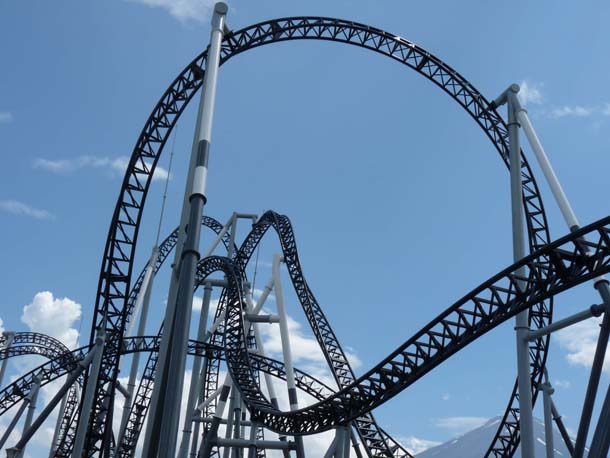 “Takabisha proves perfectly that our Euro-Fighter concept has significantly evolved since its introduction in 2003,” notes Siegfried Gerstlauer. “Nearly one decade later there are 12 Euro-Fighters of all kind and sizes. We are proud that our customer in Japan was rewarded with a new Guinness World Record.”

As with several other Euro-Fighter rides, the experience begins by dropping out of a raised station with an indoor section featuring a series of turns and dips and a surprise inversion in the form of a heartline roll. The track then takes a sharp dip into the 210ft-long (63-metres) launch tunnel. There’s no pause for breath as the cars keep moving into a rolling LSM launch that catapults riders up to the top speed of 62mph (100km/h).

Exiting the tunnel, the eight-seater cars enter a 118foot (36m) inverted top hat and then straight into an all new element known as the “Banana Roll,” a variation of a cobra roll, offering a single inversion rather than two. What follows is a large flat spin variation of a corkscrew and a series of airtime hills before hitting the mid course brakes and moving on to the vertical lift. 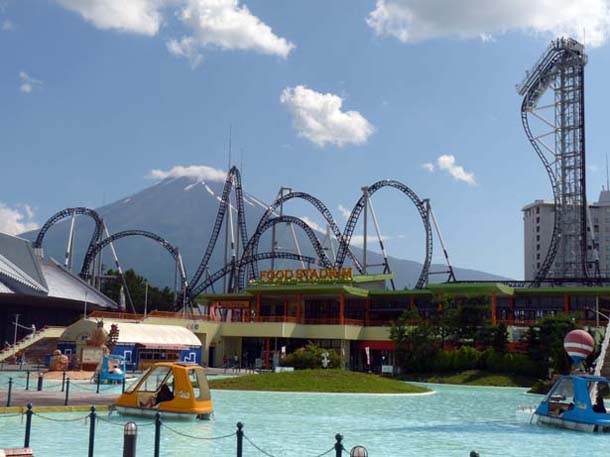 The lift hill – situated midway through the ride – gives riders their only chance for a breather as the ride packs in a large number of elements in quick succession. After climbing the 141ft (43m) hill, the cars are held by brakes as they teeter over the edge of that world’s steepest drop, so steep some may argue it’s actually an inversion. Pulling out of the drop riders experience a dive loop which is immediately followed by a loop line and then an Immelmann loop, which combined have been called the “Cows Hitch,” before arriving back at the station.

Unlike recent Euro-Fighters featuring Gerstlauer’s newer arrow formation 6-seat cars, Takabisha utilises a total of six 4-abreast cars with two rows of seats each. Unusually, the coaster has both a height and an age restriction and park guests must be at least 130cm tall and between the age of 10 and 61.

In total Takabisha features seven inversions, many of which are rarly seen, and once that outrageous drop has been adjudicated by the Guiness Book of World Records it will be the 14th time Fuji-Q HighLand has been recognised with a world record. 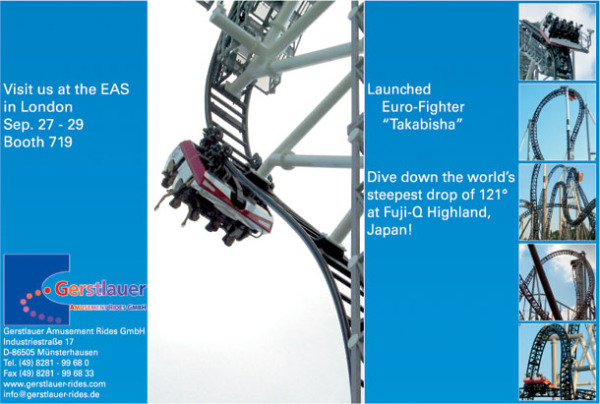