Sunshine on a rainy day 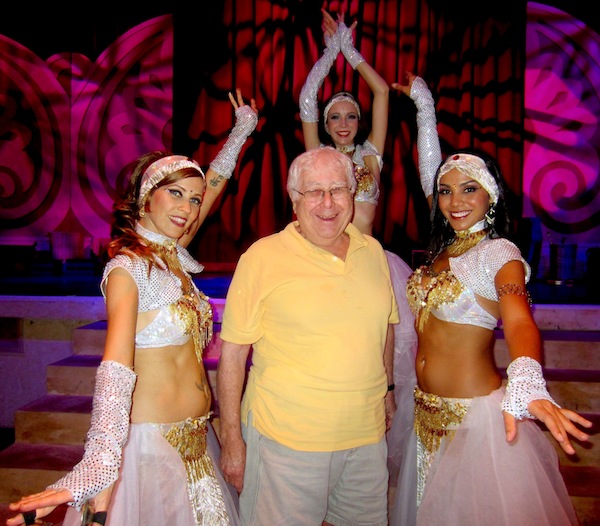 Monday of IAAPA Attractions Expo week I made a quick trip to Busch Gardens Tampa to ride the park’s spectacular new drop tower from Intamin, Falcon’s Fury. While there I made some new friends, pictured here.

That’s Christine on the left, Kathryn behind me, and Jackie is on the right. They are three of the Duma Belly Dancers at the Mystical Mirage in the Pantopia Grill, across from Falcon’s Fury. It rained that day, so I went into the Pantopia to stay dry. That’s where I met the girls, and there was an immediate connection. But more on that later. I’m wondering about some of what I learned during IAAPA.

For example, why are the major operators such as Disney and Universal so reluctant to tell us who made their attractions? In fact, they ask their suppliers to sign non-disclosure agreements. We like to credit suppliers for their fine work, but they can’t confirm their efforts, even sometimes when it’s common knowledge within the industry. Why make my job difficult?

Two new attractions at the Expo caught my eye, a tribute to thinking outside the box. Coasters, flat rides and waterslides can turn riders upside-down, and now bumper cars, too. On Laser Fury 360 by Amusement Products (see page 16), riders bump into other riders while shooting lasers as they spin and flip. Then there are games that you can ride from Skyline Attractions. In Strike-U-Up, one player races to the top of a high striker tower while another strikes a target. What’s next? Replacing those furry little creatures with humans on Whac-A-Mole?

The Skyscraper, the first Polercoaster from US Thrill Rides, is soon to become the world’s tallest coaster. One of the selling points of the Polercoaster was that it was a giant ride in a small footprint, essentially the diameter of the tower. Well, that footprint just got a lot larger (see facing page). At the base of the ride the Skyscraper track sprawls out to the street, then back again. A bit like a Chance Toboggan Coaster on steroids. I like that it makes the ride longer. All coasters should be longer. But so much for compactness.

At the Gravity Group’s booth they announced the first modern era Switchback wood coaster (see page 10), to open in 2015 at ZDT’s Amusement Park in Texas. This coaster will run in both directions on a single track, like a shuttle coaster. I asked if they will increase capacity by running two trains; I was being facetious. I was shocked when they said, “Yes.” Turns out they have a side track to divert the returning train so the next train can depart. Imagine that. A shuttle coaster with two train operation. I’ll take their word that it will work.

Belly dancing is not one of my best skills, but the dancers were terrific. We all need a little eye candy before the start of IAAPA. Talking with the girls I first thought they really liked me, but then I realised they just wanted their photo in Park World. When the rain stopped I said goodbye and walked over to ride Falcon’s Fury. No line. Face first. Straight down. It was so much fun I rode twice. Even better than dancing girls!