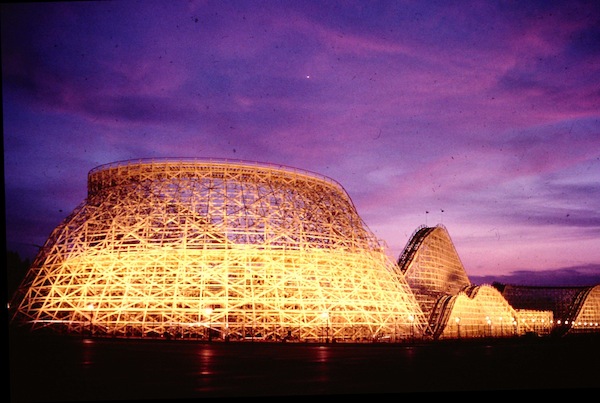 As it undergoes a transformation into a new wood-steel hybrid, Gary Kyriazi pays tribute to a classic Southern California coaster whose sprawling white wooden structure has been a major part of the skyline at Six Flags Magic Mountain since 1978.

In the early part of the 20th Century, the Southern California coastline surpassed even Coney Island as the amusement centre of the world. Along the 50 mile stretch of beach from Santa Monica south to Seal Beach, there were no less than 20 amusement piers, which are given homage today at Disney’s California Adventure park.

After the Depression and World War II, there were just two left: Ocean Park and the Long Beach Pike. With the opening of Disneyland in 1955, Santa Monica’s Ocean Park gamely reinvented itself as a theme park, Pacific Ocean Park. Although original and innovative, it was forced to close in 1967. The next year, the Long Beach Pike dismantled its legendary 1930 Cyclone Racer rollercoaster, arguably the most famous rollercoaster in the world due to its appearance in several motion pictures. The loss of the Cyclone Racer led to the closure of the Pike 10 years later.

Besides Disneyland and Knott’s Berry Farm as theme parks, there were no longer any traditional amusement parks in Southern California. And as far as wood coasters, the Los Angeles County Fairgrounds had a small yet respectable one, the Big Dipper. It was torn down by 1980. 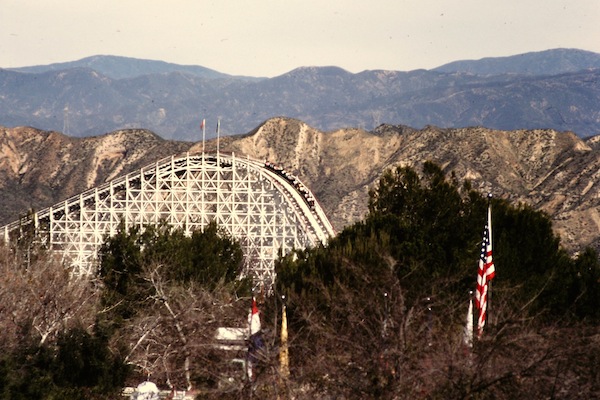 Colossus in all its original glory

Against this backdrop, Magic Mountain, co-owned by Sea World and the Newhall Land and Farming company, opened in 1971 during America’s theme/amusement park explosion. However, its only rollercoaster was a Runaway Mine Train from Arrow, in the manner of all the theme parks then, who believed that theme park coasters had to be mild and family- oriented. But the next year, Kings Island over in Cincinnati boldly opened with a major wooden coaster, The Racer, designed by the renowned John Allen. The coaster, and the park, were hits, causing the rest of the newer parks in the USA to respond with their own major wood coasters from 1973 through 1976, most of which were designed by Allen, with the Philadelphia Toboggan Company (PTC).

Magic Mountain responded to the woodies in May of 1976 by opening a steel coaster, The Great American Revolution, that featured Intamin’s first vertical loop (at Cedar Point at the same time, Arrow presented its first vertical loop with the Corkscrew; it’s still debated which actually opened first, but they appeared to be days apart). The Great American Revolution was a hit, Magic Mountain’s attendance spiked at 46% and the park, after five years, finally hit pay dirt. During those five nervous years, Sea World bailed out, leaving Newhall Land and Farming to go it alone.

At the press party for the Great American Revolution, I had a conversation with then general manager Terry  Van Gorder. After offering my sincere praises for what is still one of Intamin’s best creations, I cautiously told him, “Now, this is just a dream of mine Terry, but what I envision for Magic Mountain is a major wooden rollercoaster, and a racer to boot.”

“Well Gary,” he smiled at me, “your dream just well may come true.” We both let it go at that. I didn’t tell Terry that my dream was the return of the Long Beach Cyclone Racer. Why, just the promotion alone could knock Disneyland and Knott’s Berry Farm out of the park, at least as far as the locals. A veteran movie star like Kim Novak could attend the opening, as one of the many film stars who had ridden the original Cyclone Racer in so many films, such as It’s A Mad, Mad, Mad, Mad World. 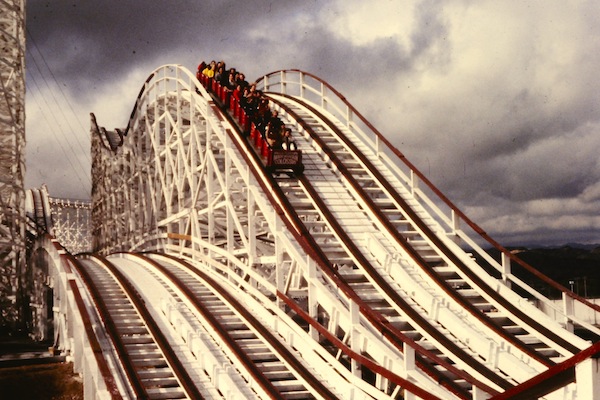 Terry Van Gorder kept in constant touch throughout the next year, and he finally revealed to me that the wooden racer he had in mind would be patterned after La Montana Rusa in Mexico City’s Chapultepec Park, a 1964 ride designed by Aurel Vaszin and Edward Leis

of International Amusement Devices in Dayton, Ohio. Van Gorder had ridden it and loved it. He wanted to change two things, he said. One was to make the first drop directly off the lift hill, unlike the Montana Rusa, which made a U-turn prior to the first drop. The other was not to use the “Mobius” track, which is one continuous track that wraps around twice to create the racing track (a good move, so that if one side is down for a reason, then at least the other side can still run).

I was dismayed with his choice to pattern his coaster after La Montana Rusa and, moreover, to use International Amusement Devices. I hadn’t ridden La Montana Rusa, and still haven’t, but those that had told me “you’d better hold on tight or you’ll go flying,” and while the first recognised rollercoaster expert Robert Cartmell rated it in 1974 as the 8th best rollercoaster in North America, he said it was the “most brutal.”

I made a polite attempt to get Terry Van Gorder to change his mind. Or, if he didn’t want to duplicate the Cyclone Racer, at least build a racer fashioned after what John Allen had so successfully done, and use PTC. Their coasters were tried and true, all of them smooth, comfortable, and highly successful with families that visited theme parks. Also, International Amusement Devices hadn’t done anything since the Montana Rusa, and their trains (which I had ridden in elsewhere) were heavy and uncomfortable. Why take such a chance?

But Van Gorder had made up his mind, I respected that, and as our film company shot Colossus’ construction throughout 1977 and early ’78 for the TV series America Screams, I watched and wondered. And I worried. I noticed steel I-beams were used as ledgers, the first time I’d seen it on a wooden coaster; would that ruin the wooden feel? Most significantly, I saw the two extreme 100ft+ drops and sharply designed smaller hills, which looked nothing like the more gradual large drops and smooth parabolas of John Allen’s deft design. I knew something was off, but only time would tell.

I first rode Colossus on media day. Brutal, painful, and truly frightening is the only way I can describe my first ride in June of 1978. Even the journey up the lift to its 115ft peak was uncomfortable. If the first drop was bad, the second drop into a small hill was worse. At the top of that small hill we were thrown up against the lap bar, our thighs painfully pressed against it for five seconds as the train then plunged below ground level, to a double-up that again threw us up into the lap bar. After that, it was just a matter of getting it over with. Six months later, a young woman tragically died on Colossus. Her short stature and unusually large girth caused her to be ejected at the top of that infamous small hill at the bottom of the second drop. Colossus was shut down.

Six Flags purchased Magic Mountain just after this tragedy, and immediately went to work redesigning the ride. The large drops were given more gradual transitions, and the sharp speed hills were lowered into the parabolas that John Allen was famous for. The International Amusement Device trains were replaced with PTC’s standard four-car trains. 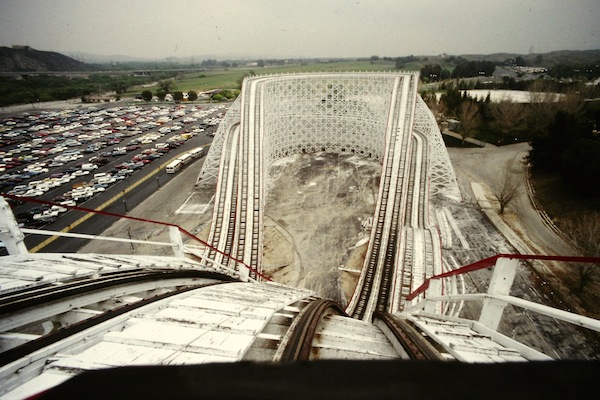 Upon riding the “new” Colossus, it was as wonderful as I had originally hoped. The steel I-beams had no noticeable effect. The ride compared favourably with, and even exceeded, Kings Island’s Racer, Six Flags Over Georgia’s ‘Great American Scream Machine,’ and Six Flags Mid-America’s Screamin’ Eagle. The trains raced wonderfully throughout the ride, and a new top-five coaster had arrived (top five on my list anyway). Most importantly, the new Colossus was a hit with the public, and Six Flags Magic Mountain never had to look back.

Not through its own fault, however, Colossus’ slow descent began almost immediately. In 1981, the Los Angeles County Department of Public Works, Building and Safety advised Magic Mountain that it could no longer race the trains, they’d have to be dispatched separately. The reason for this was never made clear, but Magic Mountain complied. The ride still rode smoothly, but without the race the excitement was lessened. In 1987 the classic Philadelphia Toboggan Company trains were replaced by trains from Morgan Manufacturing. In 1991, the effective double-down drop of the third run was levelled off to provide a block brake. And by 2000, the ride was very rough, in serious need of re-tracking.

In June of this year, Six Flags announced that Colossus as we know it would close for good. At the time, Magic Mountain spokesperson Sue Carpenter told the press: “We will announce exciting future plans for the park we think our guests will love at a later date.” And now we know – it will return in 2015 as a hybrid coaster called Twisted Colossus (see below).

It’s not the first coaster Six Flags has given such treatment to in recent years, but can a “re-tracked” Colossus be promoted with any type of guaranteed return? The cost to re-track Colossus with steel could surely be used to open a newer, high-tech rollercoaster, something that would be a hit with young thrill seekers. I guess with 18 other coasters at their disposal, Magic Mountain’s guests aren’t starved of variety. The fact remains you can’t make money off us older folks who crave amusement park “purity”. Those wonderful classic coasters that have survived, such as the Santa Cruz Beach Boardwalk’s 1924 Giant Dipper, San Diego Mission Beach’s 1925 Giant Dipper, and Coney Island’s 1927 Cyclone, are protected by their respective cities and cited as State and National

Historic Landmarks. Replacement of those rides would never be an option.

Interestingly, Colossus shares a similar history to its historical neighbour, the Cyclone Racer. Besides being a wooden racer with a figure-8 design, Colossus will have lasted 36 years, the Cyclone Racer, 38. Both coasters were featured in major motion pictures, with Colossus’ most famous appearance in the fictitious Wally World Park of the 1983 hit film National Lampoon’s Vacation. The big difference, however, is that when the Cyclone Racer closed on September 15, 1968, to make room for the Queen Mary’s new home, it was still riding like a champ, trains racing and all. When Colossus closed on August 16, 2014, it went down with a whimper. Will Twisted Colossus bring back the glory days? One thing’s for sure, it will no longer be a woodie. Told you I was a purist! 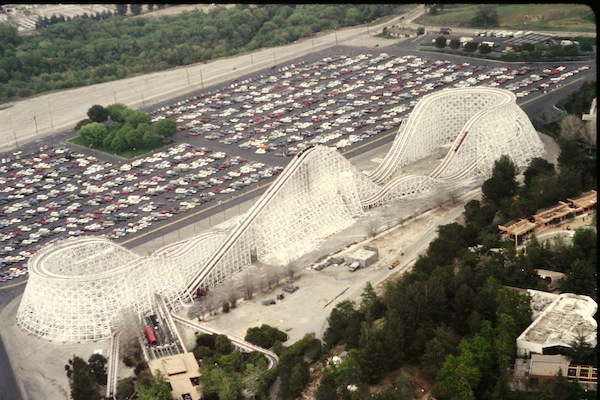 Great wooden coasters don’t die, they just get new steel track. Six Flags Magic Mountain has already embarked on a major transformation of Colossus, and plans to reopen it in 2015 as a world-record-breaking hybrid coaster, Twisted Colossus. The ride’s white wooden support structure will remain, but courtesy of Rocky Mountain Construction it will get new state-of-the-art Iron Horse track. The technology provides ride experiences never before possible on wooden coasters, such as over-banked turns and inversions. Twisted Colossus’ 4,990ft (1.5km) layout will feature a “Top Gun Stall,” an inversion where the train slows down upside down. 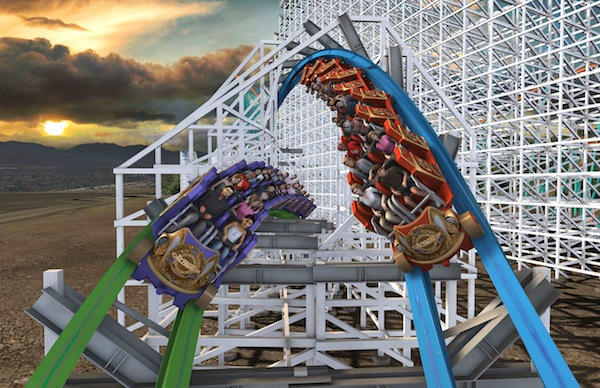 It will have the western hemisphere’s first “High Five” (pictured above) where two trains pass through an over-banked turn facing each other with the illusion that riders can reach out and salute each other. There will be a Zero G Roll where track twists 360°, a 128ft drop at 80°, 18 airtime hills and two lift hills. And unlike the Colossus of late, it will feature racing trains. Offering four minutes of thrills, Twisted Colossus will be the longest wood-steel hybrid coaster in the world. Alas, Gary Kyriazi probably won’t be the first in the queue to ride. 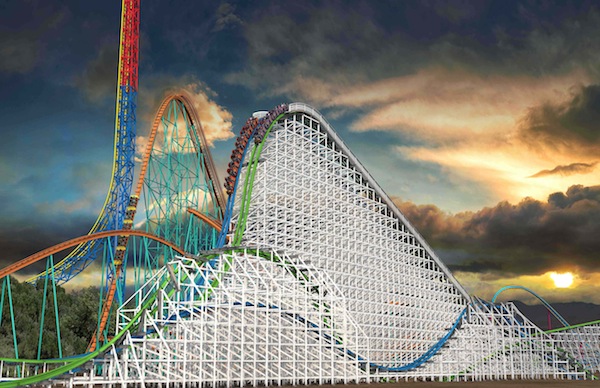