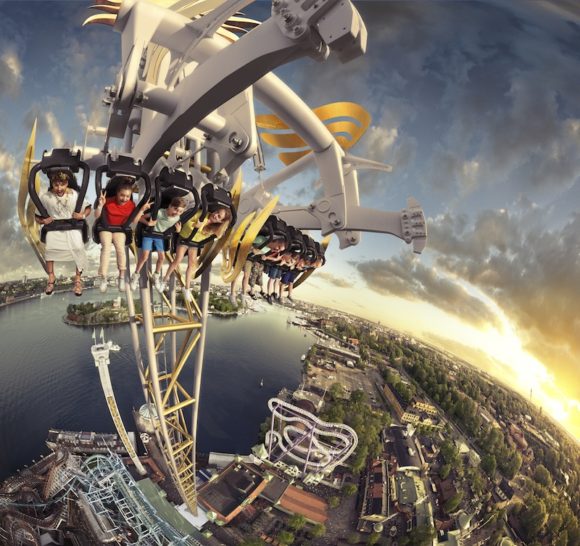 Imagine sitting in a seat with you legs dangling high above the Swedish capital of Stockholm. Suddenly, your chair is tilted more than 90 degrees, and you’re staring face-first at the ground.Then comes the drop…

This is enticing/terrifying (delete as appropriate) prospect that will be awaiting Gröna Lund guests as from next season, as the waterfront amusement park opens a new tower ride called Ikaros. The 95m-tall Sky Jump construction from Intamin will be only the second of its kind in the world (following Falcon’s Fury at Busch Gardens in Florida), and the first of this particular design.

“I have pretty much experienced all that there is in an amusement park,” declares Johan Tidstrand, majority owner of Gröna Lund operator Parks and Resorts Scandinavia. “I can honestly say that this is one of the most terrifying drop towers in the world, but also one of the most exhilarating. The feeling of adrenalin pumping through your system as you fall towards the ground, is hard to beat.”

The name of this new ride is borrowed from Greek mythology, where master craftsman Daedalus and his son Icarus attempted to escape their imprisonment from Minos by constructing wings from feathers and wax. As he was flying towards his freedom, Icarus flew too close to the sun. The wax in his wings melted and he fell towards the ground. The top decoration of the drop tower will therefor consist of a golden sun, because the closer you get to the sun, the closer you get to the fall.

Ikaros’ two 8-seater gondolas will descend the tower at speeds of up to 90km/h, delivering a maximum G-force of 3.5. The exhilarating new attraction will become the 31st ride at the compact 133 year-old amusement park, which is rooted firmly in the ‘Tivoli’ tradition. As well as boasting the most rollercoasters per square metre in the world, Gröna Lund is home to other lofty thrill rides including an Intamin Giant Drop (Fritt Fall), S&S Space Shot tower (Katapulten), Intamin ZacSpin coaster (Insane) and one of the tallest Star Flyers in the world, the 122m/40ft Eclipse.

Will Brexit be a rollercoaster ride for UK parks and attractions?