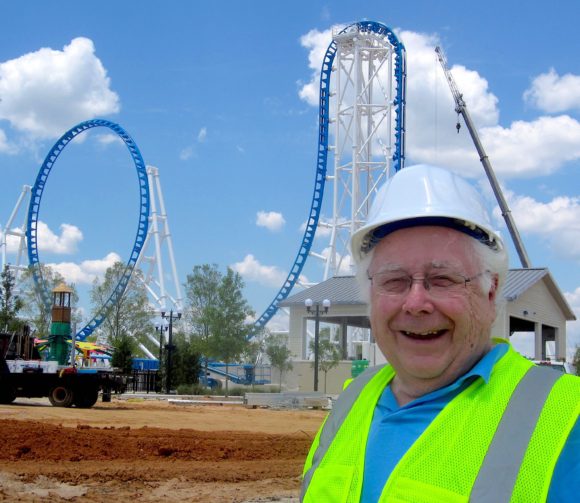 This year there is just one new amusement park opening in America. Midway between Mobile, Alabama, and Pensacola, Florida, the Poarch Band of Creek Indians are building OWA Amusement Park, part of a 520 acre (210 hectare) destination resort in Foley, near Alabama’s most popular beaches.

The 14-acre (5.7 hectare) themed amusement park will feature 21 rides by Zamperla from large-scale roller coasters to kiddie rides. It will be another showcase for Zamperla rides. Think of it as New York’s Luna Park, but in the South. There will be three thrill rides including two coasters, family rides targeting the ‘tween populations (11 to 13 year olds), and kiddie rides allowing passengers as young as two to three years old to ride either independently or with an adult. Amusement games and family friendly entertainment and dining options are also planned.

I say “planned” because like every other seasonal amusement park in the country, I expected it to open by late May, the beginning of a season that in Alabama lasts only until children return to school in mid-August. So I scheduled a visit for early June, and to my dismay, they were still pushing dirt. They open July 21, after this is written.

Phase One of OWA will feature a Marriott TownePlace Suites, the 21-ride themed amusement park, and a variety of shopping and dining experiences surrounding a picturesque lake. The lake is what inspired the name OWA, which means “big water” in the Creek Indian language. OWA is also home to the City of Foley’s Sports Tourism complex that offers 16 state-of-the-art sports fields and an indoor event center. It’s an ambitious project that is moving towards completion, just not quite on schedule. I’m reminded of what John Holer, owner of Marineland Canada, once told me about a new ride his park had been advertising all season, but by late August had not yet opened. Holer never met a schedule he couldn’t ignore. He said, “It’ll open when it’s ready.”

The Poarch Band of Creek Indians made their money operating casinos and hotels. For OWA, the tribal Phase One and Phase Two Investment will be $241 million. The total capital investment for all tribal phases will total more than $500 million. As of early November of last year, there were 34 contractors employing 420 staff working more than 100,000 man-hours, plus 136 Industry professionals working over 31,000 man-hours. And they are not done.

With bulldozers pushing dirt, cranes erecting rides, landscapers planting trees, and lighting being brought into place, OWA was not open in early June. But enough was completed that I was given a hardhat tour of the project. I got a little of the red Alabama dirt on my shoes, but only got as close to the rides as my telephoto camera lens would reach. Larsen Lien, my escort, paused long enough so I could take this photo in front of Rollin’ Thunder, their Zamperla Thunderbolt roller coaster that was still being erected. By the time you read this the park will be operating, so when I return to report on what the park has become, I’ll be able to travel the park’s walkways without stepping in red dirt.